Like fine wine, this book will get better with age

Grifter #0 won’t be a book that impresses you now, but as future issues roll by, it will be known as a required back issue.  As much as I loathe Rob Liefeld as an artist, and I’m not alone, he does a fairly good job at coming up with good plot points.  He could use a little help in the actual fleshing out of the story though.  Although he’s departing from the title with issue 14, I feel he did an admirable job setting Grifter up for the next year. Just, whatever you do, ignore the cover!

Overall it was pretty weak.  There was nothing said that contain any hidden messages, and the attempt at wit fell short.  Any important information was put right out there and spelled out for even the most amateur reader.  This can be considered a good thing, but for the type of intrigue and mystery that surrounds Grifter, you would think there would be a greater emphasis on complex dialogue.  It seemed to me that everyone spoke with the same voice and there was no discernable difference between how anyone spoke.

Enjoyed the guts. Hate the cover.  Remember how I said I loathe Rob Liefeld as an artist?  Take a look at the ‘caulking’ gun on the cover and you’ll see why.  Not to mention the gun is pointing in an awkward direction and his left arm looks out of place.  I haven’t gone through to analyze the art of every zero issue, but I can promise this gets my vote for worst cover.  As if the interior artwork could get worse than the cover, when you open the book you’ll find some really nice work. It’s dark and gritty and perfect for this kind of story. Scott Clark (pencils), Dave Beaty (inks) and Andrew Dalhouse (colorist) make a great team in creating visuals that steal the show. Some of my favorite scenes are those that show Grifter in captivity.  There is one scene, however that left me scratching my head.  Let’s just say I’m highly grateful for backlighting so we aren’t exposed to Grifter’s ‘junk’ as he fights in the back of a garbage truck. 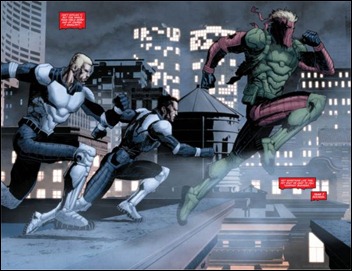 Hoping that the new creative team follows Rob Liefeld’s lead, the seeds that have been planted are very intriguing. Liefeld has spent a lot of time prepping Grifter as ‘The One’ in the pending war against the Daemonites and if it isn’t scrapped for a new direction after he leaves in November, the next year holds a lot of promise.  A new character has been introduced and Grifter’s role has changed slightly from what it was during his WildC.A.T.S. days (he’s more than just a gun in the fight).  This could be the framework for an exciting year and I for one can’t wait to get it started with next months issue as Voodoo is reunited with Grifter.  I’m eager to see if the New 52 has them as strangers, or if they are familiar with each other.

Did I mention the cover?  Because I already did, I’ll add this little tidbit as well.  Have you ever tried to say something cool but it just didn’t come out right?  The words just stumble out of your mouth because you didn’t have time to think before you spoke?  Well, in comic books there’s no excuse for that.  Grifter has one of the weakest one-liners in recent memory: “Screw you, that’s where I’m going.”  You don’t even need to know the context of what’s happening, because it makes no sense whatsoever.

“See what happens when you ain’t nicer to homeless people?” – All Warick wanted was a dime and entry into a highly guarded research Daemonite research facility.  He was denied both, so he beat the snot out of the guards.

There are plenty of reasons to like this book and only someone who is nitpicky would LOOK for things to be upset about (*cough* the cover stinks *cough*).  DC’s purpose of the zero issues was to provide new readers a good jumping on point and Grifter #0 seems to have done well here.  When the issue ends, you feel like you are now a part of something bigger and you can’t wait to see how it all plays out. While the storytelling is a bit dry, the plot points are in place and they’re great.  If you’re looking for a new character to read about, this issue is a good place to get started.

Credits:
All images courtesy of comicbook.com