Despite what the cover may have you believe, this book is no ‘bust’. Robyn Hood provides a unique and fresh perspective on the character we all know and love who stole from the rich and gave to the poor.  In this book, Robyn (notice the different spelling) is a young girl who comes from the realm: Myst.  Fairy tales are integrated into this, and several other, realms as you’ll quickly discover throughout the dialogue.  Subtle hints are dropped to other realms that exist as characters, you may be familiar with, are mentioned.

This is a well put together tale of how a baby’s life is spared and in spite of the hard times the child grows up in, she still manages to find the compassion to help others.  Pat Shand deserves a lot of credit for not only telling the story, but making the reader believe in the actions of the heroine.  While the story moves a bit quickly to introduce the players, everything still feels natural and unforced.  This is not a task easily accomplished.  Not just another pretty face, Robyn Hood is a character with depth.

The dialogue on the pages of this book is very well put together. You get a discernable voice between each character and the interactions are enjoyable. They feel like they are real people having real dialogue with each other. Robyn provides us with narration to let us know how she came to be the person she is by the end of the series as it is told in past tense. Which works really well.  The conversations are meaningful as they give you a hold on what each person’s motives are, what they mean to each other and what role they end up playing.  People aren’t talking just to talk in this book.  They are communicating.  The one-liners are clever and Robyn’s narration at one point really pulls you into her psyche.

While some panels really impressed me, there were some that seemed a bit rough around the edges.  It really looked as though there were multiple artists pencilling the issue and I had to double check several times to assure myself there weren’t.  There are some scenes that are so well done, however, that I found myself staring at the page.  Three panels in particular were almost cinematic in nature as we see through her…I, should probably let you figure it out.

My only wish was that the book could have been more consistent. The facial expressions and the body language are conveyed very well and while I’m not familiar with Dan Glasl’s work, I enjoyed it overall.  The final page of the book will get your adrenaline flowing, only to be let down by the simple fact that it’s the last page.  The action sequences throughout, foreshadow the potential for a really great visual start to the second issue. 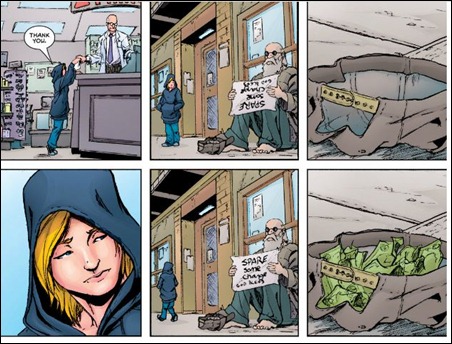 No, that’s not a magic hat. It’s Robyn Hood in action!

The concept.  It’s an old story that’s been told a thousand times, both in literature and in Hollywood, but this is something new!  This isn’t the first time a classic tale has been revamped but this is done really well.  This title was my first introduction to a book by Zenescope Entertainment and it appears that re-imagining fairy tales is their specialty.  This doesn’t take place during the dark ages, like typical Robin Hood stories, but in another realm altogether (with some time spent on modern day Earth).

The fact that Robyn has every reason to be bad, but still finds the ability to do good is another great aspect to this book.  It’s believable in the sense that as you watch her story unfold, you realize she has a greater purpose and it’s not ‘just because’.

The variant covers.  Ranging from “Epic” to “WTF”.  Some of the covers made no sense whatsoever based on the story and character, while others ‘hit the mark’ (if you’ll pardon the archery terminology).  After some research on Zenescope, it appears this is a typical practice of theirs.  They can’t pass up the opportunity to create covers that appeal to young boys with raging hormones.  I can appreciate fine art of beautiful women, I’d just like it to remain relevant. 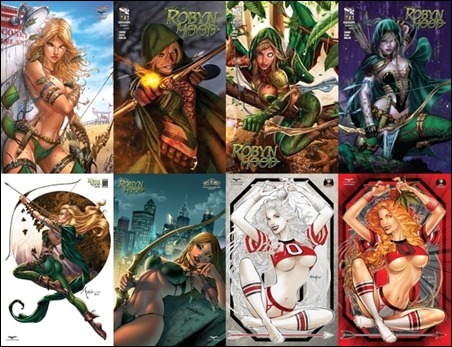 The many covers of Robyn Hood

“Don’t worry. I do not plan to spill a DROP.” – The character, Shang, in response to the notion that if he sheds a drop of his opponents blood, all hell will break loose.

Robyn Hood is a character I could really get into.  Setting the double entendre aside, this is a really good first issue.  The fact that it’s a mini-series makes it better because you are forced to appreciate everything about it, knowing her tale will end after the fifth issue.  Perhaps we’ll see a second volume come out. If the story continues as it has, I will be very interested to see more of Robyn Hood’s *ahem* story revealed.  I read the issue 3 times last night and will read again tonight.  Zenescope has a new fan!

Stephen J. Mitchell has been reading comic books since the early 90’s and recently has introduced his own children to the world of comics.  He feels that comic books have evolved to a place in literature where anyone should be able to read one without being stereotyped.