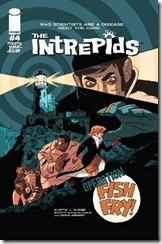 After her encounter with Jonah in The Intrepids #3, Crystal starts to have doubts about the true intentions of Dante’s actions. We also find out the fate of Crystal’s father in a flashback sequence.

In “Skeletons in the Closet,” The Intrepids prepare to assault Dr. Koi’s abandoned lighthouse facility but a rift in loyalties threatens the mission. Ms. Crow wants to change Dante’s gameplan, but Chester deems this an attack on their loyalty to Dante and refuses to take part in it. After a talk with Crystal, Chester is back on board.

After conducting their mission very professionally and in a timely manner, they discover something inside the lighthouse that disturbs them. But before they can figured out what’s going on, they encounter Dr. Koi!

Like the three previous issues, The Intrepids #4 is a fun and delightful read, but unlike those issues, we’re given more story and less background on the characters. Aside from the flashback sequence, we’re put right into the meat of the story as they prepare and begin the assault on Dr. Koi. We’re still not sure how they came about, but all that is put on the backburner and we’re given a great story.

This story brings to mind the Challengers of the Unknown by Jeph Loeb and Tim Sale. While it had the look and feel, Kurtis Wiebe and Scott Kowalchuk pull us closer to the characters and lets us empathize with them. Imagine, if you will, early Marvel character development with the Challengers thrown in and that’s what you get. (cough… Did anyone say The Fantastic Four?)

Yes, I’m going on record with equating The Intrepids to The Fantastic Four; That’s a bold statement. I don’t mean that Kurtis and Scott are Stan and Jack, and I’m not accusing the former from stealing from the latter. What I AM saying is that the feel of the book, the character interactions, the seamless flow of the story and art, and the way the characters are presented, have the same effect as reading the great comics of the past.

While, of course the Fantastic Four introduced many elements that were missing from comics that came before it and laid the groundwork for almost everything that came afterwards, I don’t think The Intrepids would exist without the FF. Kurtis and Scott take the elements that were introduced in the past and craft them into a modern tale that is a joy to read.

I’m very impressed at the sustained quality of this series, both in the writing and in the artwork. Both Kurtis Wiebe and Scott Kowalchuk should have great success with this series and beyond. I look forward to the day when I see both of them working on high profile books.