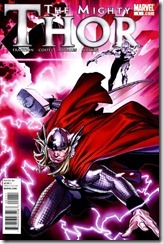 In ‘The Galactus Seed 1: The Silence,’ Thor and Lady Sif travel deep into the wounded World Tree, Yggdrasil, to recover the seed in order to make it whole once more. They are attacked by large creatures protecting the Tree from infection; this time the infection is Thor and Sif.

Meanwhile the young Loki is trying to get his commissioned helmet from an ironsmith who is suspicious of his intentions. Convincing the ironsmith that he needs it to save his brother, the helm exchanges hands and Loki dives into the World Tree to do just that. They eventually find the seed and present it to Odin, but not before Thor is injured. Oddly, the wound Thor sustains does not bleed, but does something very strange!

Elsewhere in the cosmos, The Silver Surfer surveys a dead planet for his master – Galactus. Summoned by his herald, and driven by his unending hunger, Galactus begins to consume the planet. The Silver Surfer, continuing his search for more uninhabited planets for his master to consume, senses a great source of power that could feed Galactus for ages. He ultimately arrives at a planet he didn’t expect to find.

Matt Fraction tells a wonderful tale that intertwines three different story threads: a preacher that questions the nature of his faith, the World Devourer that is always seeking out sustenance, and the Asgardians trying to save Yggdrasil. All three seem to be headed in the same direction and will eventually meet. I especially enjoyed his writing in the Silver Surfer sequence of events.

The art by Oliver Coipel and Mark Morales really captures the intensity of the writing. Each story thread holds it’s own with the different layouts used. The  Asgardian storyline is composed entirely of double page spreads; conveying the scale and importance of the events. Whereas the Galactus portion is almost entirely narrated by the Silver Surfer and gives us the feeling of what it truly the nature of his duty.

I was really impressed by his depiction of Galactus when he’s summoned by his herald. That particular portion of the story made me want more Galactus artwork from Olivier. I’m sure that where this story is headed, we’re all in for a treat in that department.