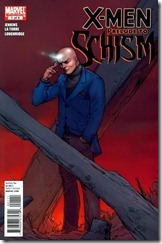 In part one of ‘Prelude To Schism,’ we’re thrown into a story that’s already started. Cyclops, as leader of not only the X-Men, but the entire nation of Utopia, is burdened with making a decision that will forever impact the future of mutant kind. The rest of the X-Men chief advisors argue amongst themselves as their leader mostly stares out the window reminisces with Professor X the entire issue.

We’re never sure of what the danger is or where it’s coming from, we just know something has to be done soon or Utopia will be destroyed along with the mutants residing on it. It’s too late to evacuate and it seems like everyone is bracing for the inevitable. Apart from the flashbacks, the whole story that takes place on Utopia is just the X-Men waiting on Cyclops’ decision.

The flashbacks, which are told from the perspective of Professor X, tell of how much Scott Summers has endured in his life, how he’s been able to stand up and cope with his problems. In coping with everything that’s happened, he’s become the quintessential leader of Mutant kind. He’s been able to do what Professor X has long dreamed of but has been unable to accomplish: Unite all mutants. Now that he’s facing an overwhelming threat, he’s the only one capable of making the right decision.

The story has an overwhelming sense of dread and finality to it, but also feels like Paul Jenkins dragged it out more than he should have. This is like a history of Cyclops’ pain, loss, and hopes as told by Charles Xavier. We never get a sense of what trouble the X-Men are in or who is the cause; we’re left to wait on their leader’s decision on what they will do.

The artwork by Roberto De La Torre helps convey the mood because of the sketchy style he uses. It’s a very loose inking style, yet the proper details are all there. This style reminds me of cross between a very reigned in Bill Sienkiewicz and Alex Maleev. I really enjoyed the art style on this issue, despite my problems with the story.

This story isn’t a prelude to what is going to happen in terms of action, but more of what will happen to the X-Men internally as a result of Cyclops’ final word. While I’m looking forward to how this will affect the X-Men Universe, I don’t know if it needs to be stretched out into a four part story. By the end of the story, big things are sure to happen, but I felt this issue started off a bit slow and tedious.