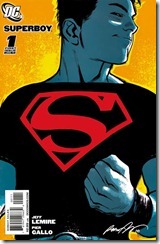 While Conner Kent and Krypto hang out on a water tower in Smallville, The Phantom Stranger appears and warns him that bad things are about to happen. Of course, being the Phantom Stranger, he’s very cryptic and is always in a hurry. Always ready to explain more at their next meeting – whenever that will be.

Later on, Conner joins up with his best friend and ‘wannabe mad scientist’ Simon Valentine who tells him that he knows that Conner is Superboy! As Superboy is shocked to hear that, The Parasite sends him flying through a hardware store window. While they battle it out on Main Street, The Parasite starts to deplete Superboy’s strength and Krypto arrives just in time for Superboy to get them away from town and into the open. Narrowly defeating The Parasite, Conner and his pals are in for a shock.

Jeff Lemire’s writing on Superboy is a delightfully easy read that doesn’t take itself too seriously. Once the villain shows up in the book, it’s nonstop action through to the last page. Pier Gallo’s art style is perfect for this book as well. The clean line work and detail give this book a ‘classic’ Superboy look. He reminds me a lot of Kevin Maguire’s style.

I enjoyed Conner’s lackadaisical interaction with the always stern and serious Phantom Stranger. The dialogue and character relationships work well in this issue. Judging by the way it started, I’m looking forward to reading more of the series in the months to come.