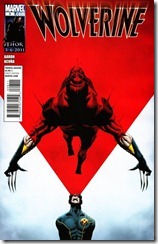 Last issue – the female X-Men, with the exception of Storm, entered Wolverine’s mind to help Logan make a last ditch effort in defeating the demon that is about to gain total control of his body and soul. While Storm tries to keep him immobile, Dr. Nemesis and Fantomex arrive as Plan B in the takedown of Wolverine. Storm tries to stop them from killing Wolverine to give the women a little bit more time to help and get out of his mind, but not before Dr. Nemesis shoots him in the face with a bullet containing “Bubonic Plague… with a side order of mouth cancer and just a dash of flesh eating bacteria.” This is to short out his healing ability just long enough for Fantomex to completely blow him apart in a hail of bullets.

Elsewhere in Wolverine’s mind, things are starting to fall apart. The group is split up and encounter many doorways into his psyche. Doors labeled anything from ‘Sexual Fantasies’ to ‘X-Men I’ve Had Sex With’ to ‘Hopes and Dreams’ give some of our heroes a slight glimpse into his mind, and it isn’t always pretty. Just as things are turning hopeless, Nightcrawler shows up to help his friend – along with Jean Grey, The Phoenix!

While neither the characters nor the reader are told if they are real or not, Nightcrawler and Phoenix is such a strong part of Wolverine’s psyche that it doesn’t matter. The effect of their arrival and outcome is strong enough to provide the desired effect. Yet Wolverine has to let Jean go in his mind for her to defeat the demons. After struggling with this decision and only after seeing the door labeled ‘People I Have to Kill Before I Die,’ does he allow himself to live.

Jason Aaron has done a fantastic job on this story arc, setting up some emotional conflicts and story points that will run through not only this series, but the X-Men line in general. While I thought the humor was off-putting in the first part of the story arc, the mix of humor and seriousness in Wolverine #8 is perfectly balanced with the action. I would certainly love to see him take on the X-Men on a regular basis.

I still have a problem with the artwork in this run. While the style and art works fine, I find it highly inconsistent when it comes to the detail. Some pages look perfectly fine with the line work complete, yet in others, the faces don’t seem to be drawn in but colored in instead. It takes away from the experience seeing drawn heads with blurry colored in faces. The story doesn’t suffer, but it takes away from the whole sensory experience.

If you haven’t read the first 2 parts of the ‘Wolverine vs. The X-Men’ story arc in Wolverine #6 & #7, go pick them up and then finish it off with this great issue.