New series by Fraction and Zdarsky
to be released in 2013

Comic book creators Matt Fraction (CASANOVA, Avengers vs. X-Men, The Invincible Iron Man) and Chip Zdarsky (Prison Funnies, Monster Cops) invite you to come with them as they release SEX CRIMINALS through Image Comics in 2013. This brand-spanking new sex comedy follows two young lovers as they go on a lust-fueled crime spree with a twist — when they have sex, time itself seems to stop. Set in a world where the laws of time and space are as dubious and mutable as the laws of man and society, SEX CRIMINALS promises to scandalize, titillate, and provoke when it bursts onto the comics scene next year.

"Not to toot our own horns, but there’s never been a comic book like Sex Criminals before,” Fraction tossed off. "There’ve been comedy books with sex, or sex comics with comedic moments, but no book with ‘sex comedy’ as its narrative thrust. Hard to imagine, but comedy and sex, which fit together so naturally literally everywhere else in the entertainment world, don’t get done in comic books. Chip and I are thrilled to be the first ones in there to plant our seed.”

Zdarsky, legendary cartoonist for National Post and impish Canadian prankster, topped that statement: "This project brings together my two loves: crime and an in-depth exploration of the Western banking system and its ill-effects on society. I’ve spent years working for newspapers and magazines and am looking forward to completing my ‘dying industry trifecta’ and give comic books my all while holding back the tears.”

Fraction and Zdarsky, having searched long and hard for the perfect collaboration, knew they were destined for each other if only the right project came along. "Chip is a singular creator in the world of comics: he’s smart, he’s talented, he has an eye unlike any other, and he makes me laugh like a jackal,” Fraction spewed forth. "He’s like a smutty Day-Glo Will Elder that spells words with u’s where they don’t belong and uses the metric system. I’m excited to think the words ‘SEX CRIMINALS’ will now appear in his obituary later this year.”

Zdarsky gushed "There’s a very short list of people who I would want to work with on a comic project and Matt Fraction is at the top of that list. I love the humour he brings to his projects and always thought he should do something all-out funny, because, frankly, there aren’t enough funny books out there since Identity Crisis. No wait. Was Blankets before or after Identity Crisis?”

An ongoing comic series that puts the comic back in comics, and the sexy back into sex crime, SEX CRIMINALS comes in 32 full-color pages for a cover price of $3.50. 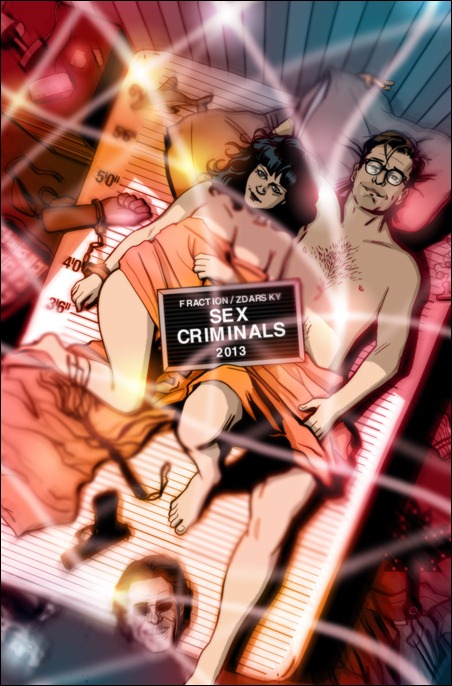