Jim Downing, the newest Hellspawn, has been a man without a past and with a future that is out of his control. However, as SPAWN delves deeper into his story, Jim will begin to embrace his powers, encounter old enemies, and uncover the secrets that lie at the center of the circles of Hell.

"As we head into the second half of the year, in which we will have another twelve issues completed — making that 27 consecutive issues by the same creative team — the Spawn comic is starting to hit its stride," said McFarlane. "With the continuing growth of our new main character and the shift to a darker tone, the book is now becoming the blueprint for what we hope to unveil in other entertainment arenas."

Throughout the year, McFarlane will create homage covers to some of the most iconic issues in comics history — those already revealed include SAVAGE DRAGON #1 (cover B of SPAWN #220), YOUNGBLOOD #1 (cover C of SPAWN #220), and THE WALKING DEAD #1 (SPAWN #223). The interior art is by Szymon Kudranski. SPAWN #222 is will be in stores on August 8. 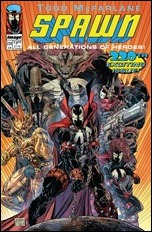 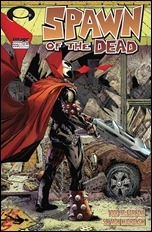