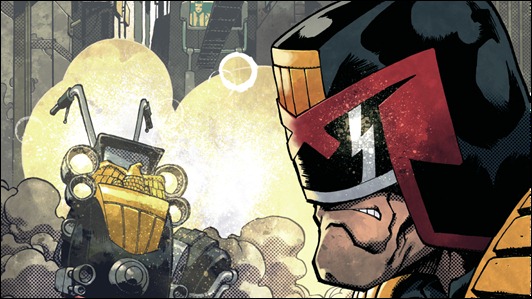 The acclaimed creators will take readers to Mega-City One this winter!

After announcing their partnership with the legendary 2000 AD at WonderCon 2012, IDW Publishing is proud to announce Duane Swierczynski and Nelson Daniel as the creative team for their brand-new JUDGE DREDD series! The announcement was made to a capacity crowd during a panel at San Diego Comic-Con 2012 celebrating Dredd’s 35th anniversary.

”I’ve loved the work both Duane and Nelson have done for us separately—they’ve both been responsible for some amazingly action-packed and thrilling comics likeGodzilla and The Cape,” said IDW’s Chief Creative Officer, Chris Ryall. “So partnering them on Judge Dreddis only going to amp up the excitement here.

“What’s more,” Ryall continued, “while Nelson will be running point on the main story’s art and colors, we’ll also be doing back-up stories in each issue that are tied to the ongoing storyline and that will be illustrated by some big-name talents as well. Folks like Paul Gulacy, Jim Starlin, and many others. Add to that covers by people like Ashley Wood, Carlos Ezquerra, Zach Howard, Whilce Portacio, and so many others, and there will be lots of exciting new artistic interpretations of Dredd to come.”

2000 AD’s Matt Smith echoed Ryall’s excitement “Ever since we announced the deal with IDW, Dredd fans all over the world have been eagerly awaiting news of which writer and artists will be coming to Mega-City One. We’re really pleased with the creative line-up, which will bring a new dimension to Dredd for a whole new generation. It’s been great to see the reaction 2000 AD and Judge Dredd have had at SDCC 2012–and with the new film out in September, 2012 really is the year of DREDD!"

IDW’s JUDGE DREDD series will see new adventures from the legendary character—originally created by John Wagner and Carlos Ezquerra for the lauded British anthology magazine 2000 AD—who has seen a long and storied career as one of comics’ most popular and enduring characters. For this take on Dredd, IDW and 2000 AD wanted to put creators behind the wheel that hadn’t worked with the character before, creating new stories that would appeal to new Dredd fans, as well as long-time lovers of the rich world of Mega City One.

“I discovered Judge Dredd at the tender age of 15 through a somewhat unlikely source: a bootleg Commodore 64 game where you move Dredd through a digital Mega-City One and pretty much shoot everything in sight. Jonesing for more, I realized that Dredd was a UK import, and super-tough to find here in the U.S. Over the next 25 years, I snapped up all the Dredd stories that I could, savoring them like exotic treats smuggled through customs,” Swierczynski enthused. “When IDW announced an American version a while back, I was over the moon — never even thinking that I would be approached to write this new version. Needless to say, this is the opportunity of lifetime, and I couldn’t be more thrilled. The 15-year-old in me may never recover.”

Daniel shared in the excitement “Judge Dredd is one of my three favorite characters, I’m really excited. Everything in Megacity is amazing, everything is possible, and that’s something I want to draw.”
Citizens, consider yourselves advised; this November, comics are the law! 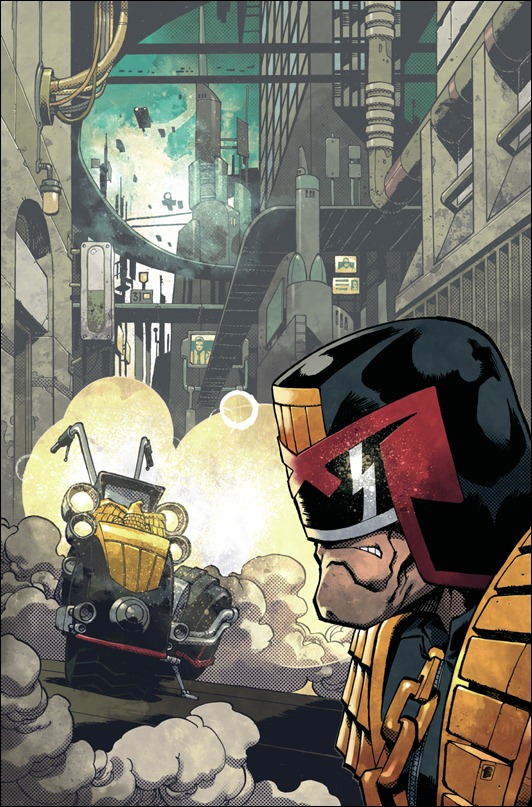