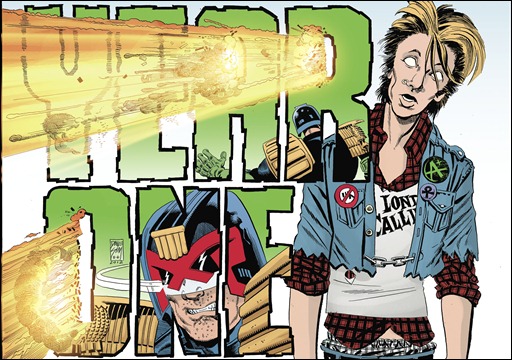 The Legendary Lawman’s Early Days to Be
Chronicled in Upcoming Miniseries!

Though Judge Joseph Dredd’s exploits have changed the post-apocalyptic sprawl of Mega-City One forever, there was a Mega-City One before Dredd ever hopped aboard a Lawmaster. In March 2013’s JUDGE DREDD: YEAR ONE, Eagle Award-winning 2000 AD Editor-in-Chief Matt Smith takes up arms with Dredd veterans Simon Coleby on interiors and Greg Staples on covers to deliver the thrilling exploits of a younger Judge Dredd!

Here is an 8 page preview of The Zaucer of Zilk #1, by Brendan McCarthy & Al Ewing, from IDW Publishing on sale Wednesday, October 16th, 2012.

Get Zaucy! IDW is proud to announce this special collaboration with 2000 AD and Rebellion Publishing, The Zaucer of Zilk, Brendan McCarthy & Al Ewing’s phantasmagorical psychedelic extravaganza from beyond the fringes of imagination! 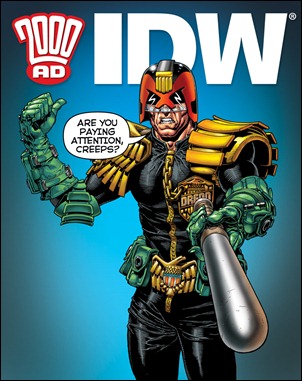 IDW Publishing has partnered with 2000 AD to launch a line of Judge Dredd comics starting later this year.

Details and creative teams will be announced at a later date, but the partnership includes the creation of all-new Judge Dredd comics as well as deluxe reprints of classic Dredd material.

“Judge Dredd turns 35 this year, and it’s great to help him celebrate his birthday like this,” said Chris Ryall, IDW’s Chief Creative Officer/Editor-in-Chief. “It was great to meet up with the 2000 AD team at the recent London Super Con and cement the partnership on this one. My interest in Judge Dredd far predates my tenure at IDW, so it’s a real drokkin’ pleasure for us to now be the first American publisher in 18 years to create new tales of Dredd.”