Ok. I admit it. I don’t like change. I’m not comfortable saying I’m a “purist,” either. I think (I hope) I’m a little bit more open minded than that. But, any time DC/Marvel start announcing changes to this character or that universe, I tend to give into my knee jerk reaction. Especially when these announcements involved a “death” of a character (main, or otherwise). 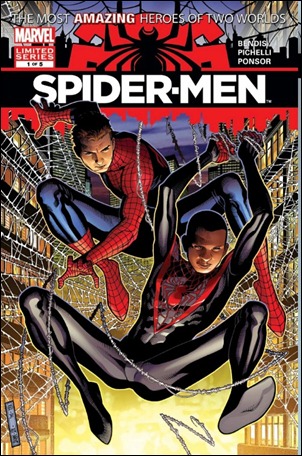 Why are they swinging around without their masks on?!?! Why, oh why!?!?

Your First Look at SPIDER-MEN #5!

Here we have a four page unlettered preview of Spider-Men #5, written by Brian Michael Bendis & penciled by Sara Pichelli, and featuring a cover by Jim Cheung. It seems like Cheung has been doing a lot of covers at Marvel lately, but as long as they’re as good as they’ve been, he can do them all!

Your First Look at SPIDER-MEN #3! 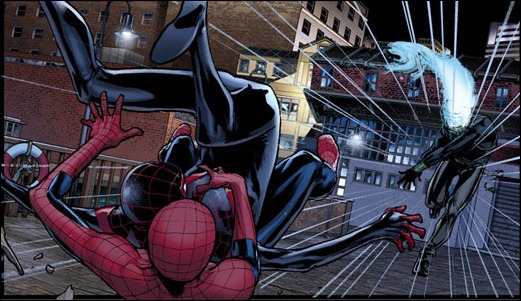 Marvel is proud to present your first look at Spider-Men #3, as the blockbuster creative team of best-selling writer Brian Bendis and red hot artist Sara Pichelli bring you the next chapter in the ultimate Spider-Man event of the year! Now that Peter Parker and Miles Morales have met, can they both work together to defeat their foes – or will they require the help of Nick Fury and his Ultimates?

Marvel ReEvolution Brings Back Landmark Initiative – For A Limited Time!

The Marvel ReEvolution grows as the fans prepare for a universe bending tale like no other in Spider-Men #1! Marvel is proud to announce that starting Sunday (6/3), in celebration of Spider-Men, just one qualifying purchase on the Marvel Comics app or Marvel Digital Comics Shop gets you a $5.00 coupon for your local participating comic store!  From June 3rd at 12:01am EST to 11:59 pm EST on Sunday, June 10th, if you purchase* select** comics featuring everyone’s favorite web-head on the Marvel Comics app or the Marvel Digital Comics Shop, you will be e-mailed a link to a coupon (on June 11th)*** valued at five dollars to be used for any Marvel comics or graphic novel purchase at your local participating comic store. Please note that only one coupon is available per Marvel accountholder during this limited-time offer and may only be redeemed at select comic shops.****

Your First Look at SPIDER-MEN #2! 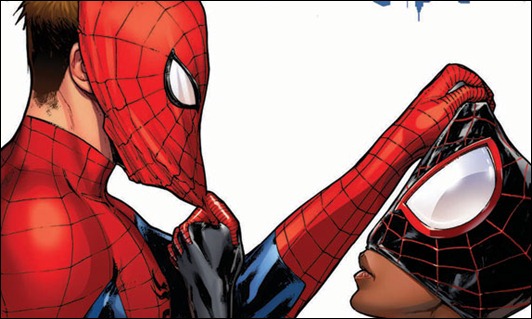 Marvel is proud to present your first look at Spider-Men #2, by the chart-topping creative team of writer Brian Michael Bendis and artist Sara Pichelli!

When Peter Parker is thrown into Miles Morales’ world, the duo begin a journey that will not only answer questions about their own identities, but also reveal the truth about a major character in the world of Spider-Man! Kick off Spider-Man’s 50th anniversary in style with double the web-slinging action in Spider-Men #2, hitting comic shops, the Marvel Comics app and the Marvel Digital Comics Shop this June. 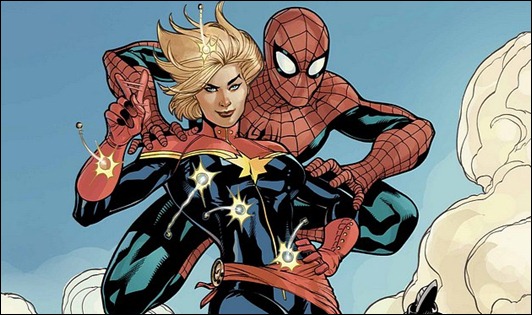 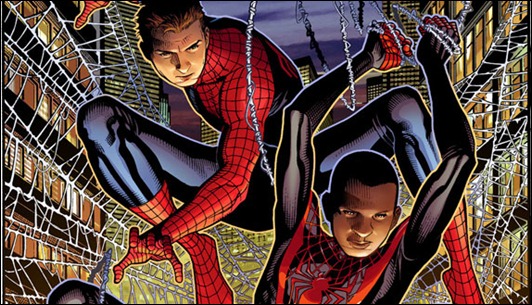 Today, after two months of secrecy and teaser images, Marvel released the details of their Spider-Men series by Brian Michael Bendis and Sara Pichelli.

Here are all the details…

Marvel Comics wasn’t going to be left out of the news, no matter how much Before Watchmen just utterly dominated the comics industry today.

A posting on their website was very plain, simple, and completely devoid of any information whatsoever. It didn’t even have any text, save the “Spider-Men” title of the post.