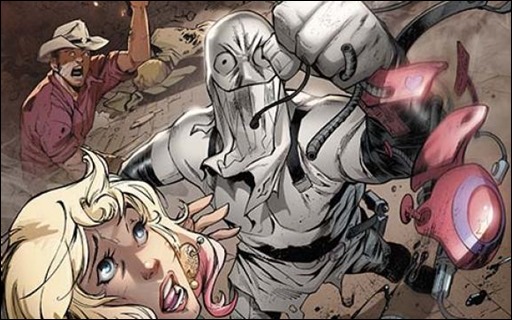 Here are the The Edge Group solicitations for August 2013 courtesy of DC Comics.

Hex is trapped in modern-day Gotham City…and he’s getting ready to shoot his way out! Find out how he got here—and see what part Batman plays! And in the backup story, the Vigilante seeks revenge!

Art and cover by IG GUARA and J.P. MAYER

The richest teens in the world are in over their heads. Obviously, it’s time to go public with their existence! That is, if everyone survives the fight against Riot and the mysterious villain who’s been pursuing them all along!

The Movement takes a stand against the police that they can’t come back from, and Coral City is on the brink of war!

The true nature of the Kollective is revealed, and the mystery surrounding past Stormwatch teams grows!

Suicide Squad is sent on a mission to take down a dictator who is planning to create his own metahuman army. But what the Squad doesn’t know is that he already has a batch of super-powered soldiers ready to defend him—cue the mayhem! Plus, the true nature of Waller’s new deal with the team is revealed!

The game is over for the Hunted! Who lives and who dies is sure to set the universe ablaze. Plus, a major villain emerges from the shadows!