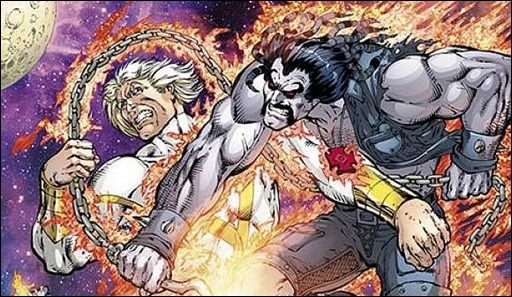 Here are The Edge Group solicitations for July 2013 courtesy of DC Comics.

When the Hunted fight back against their persecutors, a connection between Blue Beetle and Apokolips sparks a riot! And don’t miss the start of a new backup tale spotlighting Star Hawkins!

After being locked in Arkham Asylum, Jonah Hex goes on the run with a partner, who’s family he’s all too familiar with from his days with Amadeus Arkham. And in the backup story, the epic of the 19th century StormWatch continues.

The richest teens in the world are dealing with some serious buyers’ remorse when the Commodore’s battle armor causes him tons of trouble! And not even a trillionaire can afford the trouble that the Commodore’s new hired muscle, Deathstroke, brings with him!

The Movement takes on the entire police department in an attempt to rescue one of their own!

Don’t miss the violence and destruction on the day Lobo joins StormWatch! How can the universe survive a battle between Lobo and Apollo?

An anarchist group has a monstrous plan to rewire the brains of the American public, starting in Las Vegas! So it’s up to Amanda Waller’s team to shut them down—but a surprise new squad member with a grudge against Deadshot threatens to wreck everything!