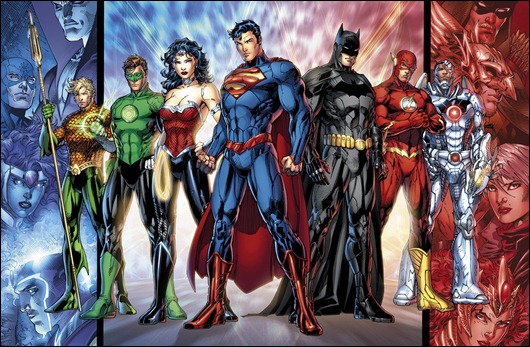 Justice League #1 was launched at 12:00am on Wednesday, August 31st, 2011 and by the middle of the day, some retailers were announcing that they had sold through on all their ordered copies. According to #comicmarket on Twitter, some larger comics stores were getting calls from other owners asking if they had any extra stock on hand to sell them.

While store owners and managers were trying to figure out how many more Justice League #1 they needed to meet their customers’ demands, they started to look at other titles that they may have under ordered. This led to calls to Diamond by retailers increasing orders on more New 52 titles – fearful of not meeting future demand.

Also announced, DC is going back to press on the Justice League Combo Pack #1, containing both a print copy and code a digital copy of the comic, which actually sold out before the regular print version.

The estimated initial print run for Justice League #1 was 200,000 copies. While that number is nothing to sneeze at these days, considering only two comics have broken the 100k barrier twice so far this year, it seemed to be a low number based on what DC was trying to generate by their relaunch. The news of the event spread quickly through mass media and generated both curiosity and anticipation. According to several retailer tweets, not only were regular customers buying JL #1, but there was an influx of new and lapsed readers. This, of course, is good news for DC Comics and the comics industry in general.

While most good retailers know their community and patrons well enough to judge their orders properly, some were still caught off guard by the demand they experienced on the first day of sale. Knowing the current state of the industry and the uncertain digital future, some stores may have ordered more conservatively than they would have otherwise. This was an event that no one was sure how it would all unfold, especially a few months after their orders were placed.

What Does This All Mean?

It’s too early to tell, but there’s a good chance this might work out well for DC.

The demand for the first issue of a title that relaunches a whole universe of characters is a legitimate one. People want to be in on the ground floor, part of the start of something new – it’s part of human nature.

The new reader knows it’s #1 and they want it. They don’t know what a “soft reboot” is and probably don’t care; only those who follow comics will argue that point. Some will buy the entire line of #1’s and call it a day. Others might pick up a few issues of certain titles to see if they like them. While others will continue to buy comics on a regular basis after they discover that they really enjoy reading them.

The lapsed reader will remember what memories they had, both good and bad, of certain books, and might be curious to see what changes DC has in store for their favorite characters. They might buy a few issues to see what direction the books are taking.

The current reader may continue the titles that they’ve enjoyed in the past regardless of the changes. Some might try out new titles that they never considered buying before the relaunch. Others may drop the books altogether while protesting the changes that were made. While a select few will claim they will never read DC Comics again, while secretly buying them.

The true test of success lies about five months down the road and beyond. Demand for #1 issues is always skewed on high profile events. We’ll have to wait and see what the orders for issues #4 and #5 will be. If the higher profile books (Batman, Detective, Action, Superman, etc.) bring in orders over 200,000 consistently, then we can assume that the event brought in readers new to comic books. Then it can be claimed to have been a success – not only for DC, but for everyone in the industry.

If the sales numbers on those books begin decline after the third issue and continue to decline regularly into the sub-100,000 copies range, then it can be argued that the event did nothing but help to temporarily increase DC’s market share for a few months. While this may be a success for DC, it’s a long way to go for a short gain.

The Dice Are Still Rolling…

DC Comics took a chance with this move and everyone in the industry should be hoping that they succeed. The relaunch was a true attempt to reach out and gain new readership from within and, even more importantly, from outside the comics marketplace. If this campaign is successful, it could mean an ever increasing marketplace for other competing publishers; Marvel, Image, Dark Horse, IDW, BOOM!, etc., could reap the benefits from a that growth.

Growth in an industry is always good for everyone involved. The shops will benefit and might not have to worry about their shrinking customer base or dwindling profits. Readers will have access to more variety since publishers may be able introduce new profitable series that might not have been otherwise published. Creator-owned properties may have the chance to make a larger profit or, in some cases, break even.

We’ll still have to wait a few months to see how this all plays out. All eyes are currently on DC Comics and their success could mean a brighter future for comic books.

What are your opinions? Leave a comment and let us know!