These are the Valiant Comics April 2013 comic book solicitations courtesy of our friends at Valiant.

“Do you know where the children are?”

HARBINGER WARS, Valiant’s first family crossover event, begins here! A decades-old secret is about to put BLOODSHOT and HARBINGER on an inescapable collision course  – and, soon, the most powerful forces in the Valiant Universe will be drawn into a battle without sides, without rules, and without mercy.

•Two dozen undisciplined, untested and untrained superhuman children have just escaped from a top-secret research facility and into the world.

•When Bloodshot, Toyo Harada and Peter Stanchek join the chase, will the Valiant Universe be ready for its first all-out superhuman showdown?

•Start reading here for a high-stakes tale that will put Valiant’s greatest heroes to the ultimate test!

“Your system has failed us. Now we must build our own.”

•The world has just become a much bigger, much more dangerous place for Peter Stanchek and the Renegades…

•How will they react to the revelation of Project Rising Spirit’s secret mission and the harbinger hunter known as Bloodshot?

•Find out in PART ONE of HARBINGER WARS: HARBINGER!

“Hitting the target is more important than who pulls the trigger.” 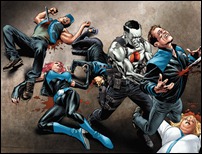 •Bloodshot has banded together with Project Rising Sprit’s most dangerous escapees.

•Can he shape them into a force for good – or are they too far gone?

•Find out in PART ONE of HARBINGER WARS: BLOODSHOT!

What lurks beneath the surface of PLANET DEATH?

Aric of Dacia has taken his one-man war to the Vine’s homeworld, Loam, and is using their own X-O Manowar armor to wage it.  Finding an ally in the unlikeliest of places, Aric will discover that his mission to reduce Loam to ash will come with a high price. Past, present, and future are about to collide, and if Aric isn’t careful, he will be the common thread that undoes them all.

It’s all over for the Eternal Warrior!

Gilad and Armstrong must set aside their sibling rivalry long enough to defeat the deadly new champion of The Null… ARCHER! It’s win or go home (i.e. "die") as "Wrath of the Eternal Warrior" reaches its bone-crushing conclusion!

The dead rising are rising in New Orleans.

The Deadside is spreading throughout the city, while a sinister new menace gathers an army that can’t be killed. Meanwhile, Jack is about to discover that his Shadowman powers are as much a curse as a blessing.

There are a million dreams in the Big Easy. But now its worst nightmare is about to come true.

As the forces of darkness prepare to claim New Orleans as their own, Jack Boniface must embrace the legacy he was born to uphold. As Shadowman, Jack is about to become the only thing that stands between his city and an army of unspeakable monstrosities from beyond the night. But is the mantle of Shadowman a blessing or a curse? And what is the true cost of his otherworldly power?

“It’s simply stunning… ‘Shadowman’ is another awesome notch in the belt of Valiant.” – IGN

“Jordan and Zircher have given us a winner with ‘Shadowman.’" – Comic Book Resources