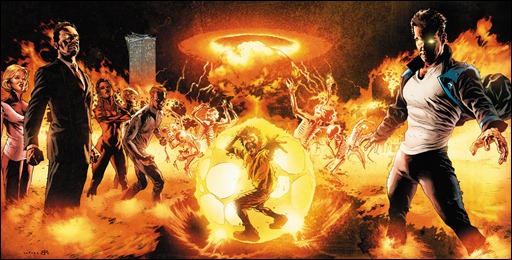 Toyo Harada, CEO of Harada Global Conglomerates and the most potent known psionic in the world, has a vision for the perfect future. A vision he will realize with or without the consent of the rest of humanity. In order to achieve it, he’s built a private army of super-powered hyper-telekinetics within the Harbinger Foundation. But who was Harada before he became the world’s most powerful man? And what are the origins of his vast ambitions? Don’t miss those answers and more in this special standalone issue that will define the future of the Valiant Universe.

With the Vine invasion fleet waiting in orbit, Aric of Dacia is forced into the one battle he never wanted, against the strongest, most horrifying opponent he’s ever faced.  This adversary doesn’t want the X-O Manowar armor.  It doesn’t want Earth.  It only wants Aric — dead.  The winner will hold the fate of everyone – human and Vine – in the palm of his hand.  Because before this fight is over, the armor will reveal that it wields far more destructive potential than anyone could have possibly imagined. Robert Venditti and Trevor Hairsine conclude the two-part prelude that sets the stage for the epic war everything has been building up to. X-O Manowar is going home!

Bloodshot may be the best, but he wasn’t the first.  Bloodshot is taking his revenge on Project Rising Spirit—the secret quasi-government experimental division that created him — one body at a time. But nothing could have prepared him for what’s waiting for him inside the Nursery.  Deep underground, get ready to go to war with the band of misfit killers that Bloodshot used to call brothers-in-arms. Cleaner. Recon. Point. Gunner. Team: CHAINSAW is reporting for duty, sir!

Who shoots The Shootist?!

What would an Eternal Warrior be without an immortal enemy? For centuries, The Shootist – the Sect’s most feared assassin – has been a pivotal player in world events.  Now he has Archer & Armstrong in his sights! With Gilad and the new Geomancer’s help, can they stop the man who only fires shots heard ’round the world?

Nothing can bring her down.

She’s the light in the dark. The soul of a rising resistance movement. Here now, for the first time, is the story of Zephyr (aka Faith Herbert… but shhh don’t tell anyone)!  As danger closes in on all sides, Faith must begin the trials and tribulations of being the Valiant Universe’s first real-life superhero. Learn the secret potential of her powers and the truth about her time at the Harbinger Foundation, then follow her into battle to save the other Renegades. Look, up in the air! It’s a bird, it’s a plane… it’s freakin’ Zephyr!

Shadowman and the monstrous Mr. Twist battle to the death! Everything is at stake for Jack, Dox, and Alyssa – and for the world as they know it – because if Twist succeeds, then Master Darque will walk the earth once more.

Every mission is a suicide mission.

Your name is Angelo Mortalli. Your brother is trapped behind enemy lines and on the verge of — no. That’s not right. Your name is Raymond Garrison. You’ve retired from the dangers of the field, but a desperate plea from your oldest friend plunges you into a vicious firefight that — no. That’s not right, either. You are Bloodshot. You are the shade of gray that freedom requires. The perfect confluence of military necessity and cutting-edge technology. A walking WikiLeaks. A reservoir of dirty secrets that could set the world on fire. And you’ve just been captured.

Collecting BLOODSHOT #1-4 (2012) by best-selling writer Duane Swierczynski and acclaimed artists Manuel Garcia & Arturo Lozzi, find out why this is the series that has IGN proclaiming “Valiant is quickly becoming the publisher to beat.”

Colin King – sophisticated British playboy by day, elite super-spy by night! Codenamed Ninjak, King is gifted with a brilliant mind and lethal training in the world’s most dangerous fighting techniques. Both will be put to the ultimate test as he is drawn into globe-spanning mission to apprehend Dr. Silk, mastermind of the WEBNET terror network, before the mysterious weapon known as “Black Water” goes online.  From the British Isles to the land of the Rising Sun, Ninjak will leave an indelible imprint on the Valiant Universe – or die trying. Collecting NINJAK (1994) #1-6, #0, and #00 and featuring special, rarely seen sketches and process art from the Valiant vault!