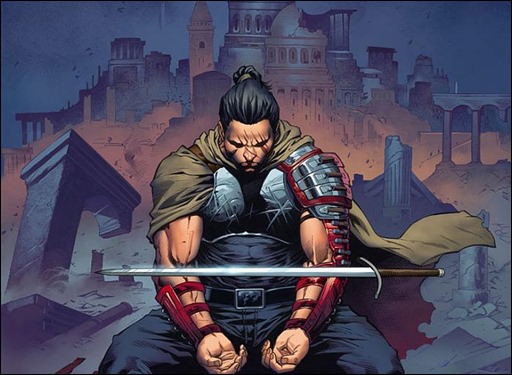 THE FUTURE HAS ARRIVED. Two thousand years from today, the planet has been transformed by science, technology…and war. The centuries have not been kind to the Earth’s own undying warrior – but a battle that could change everything is just beginning right here in 21st century. Rising star Diego Bernard joins New York Times best-selling writer Greg Pak to make history with a brand new vision of the Valiant Universe that is to come and define a brand new era for heroes – past, present and future.

MUST READ VALIANT! All-new arc, all-new jumping-on point! Joshua Dysart and Clayton Henry launch “RESISTANCE” – and end the Renegades war against Toyo Harada once and for all.

Peter Stanchek and his team of teenage superhuman outlaws have decided that the best defense is a strong offense. Pursued from coast-to-coast by their would-be overlord in the Harbinger Foundation, the Renegades are about to launch a strategic strike on Harada’s secret empire – and they’ll start by revealing to the world just what kind of power they’ve been hiding all along. The ace up their sleeve? A seemingly normal teenage hacker named Ax…who knows exactly what Harada has been up to since day one…

Bloodshot and the expendable commandos of H.A.R.D. Corps face off against a network of terrorist saboteurs in the heart of the Persian Gulf! But as Bloodshot digs into the multinational oil conglomerate that’s signing his paychecks, he’ll soon find himself confronted by the complex truth behind the terror – and face-to-face with an older, scrappier, more grizzled generation of superhuman soldier from the glory days of proxy wars and state-sponsored assassination.

Find out why VALIANT is the MUST READ superhero publisher in comics today with a greatest hits collection of can’t-miss moments from across the Valiant Universe! Re-presenting X-O MANOWAR #5, QUANTUM AND WOODY #1, HARBINGER #1, HARBINGER WARS #2, and SHADOWMAN #0, MUST READ VALIANT: GREATEST HITS #1 is the perfect place to find out why IGN is declaring: “Nobody is making superhero books like this, which is exactly why you should be paying attention to Valiant Comics.”

Stripped of the X-O Manowar armor, Aric of Dacia has been imprisoned and interrogated at an off-the-grid black site. But what knowledge could the governments of the world want from a man who has journeyed 1,600 years to the present? A man who liberated an alien planet? A man who once wielded the most powerful weapon in existence? What knowledge could they want, you ask? All of it. And the agents of UNITY will extract every one of Aric of Dacia’s secrets by any means necessary.

As the Shadowman loa begins to exert its influence in even more unexpected ways, Jack Boniface is quickly coming to terms with the darkness inside him and finding out firsthand just how brutal unchecked power can be.  With word of Shadowman’s increased unpredictability spreading across New Orleans, the Abettors grow even more suspicious of their newest trainee…and begin to consider drastic measures.

So…two superheroes, a clone, and a goat move into a junior two-bedroom…

As a totally questionable romance blossoms between Woody and his runaway science experiment girlfriend, Eric finds himself quickly rising through the ranks of his new employers at Magnum Security. But when he comes to find that his duties as an on-staff superhero are bit more unsavory than he ever expected, it’s down to Quantum, an old army buddy, and Woody—interloper!—to discover the illicit truth behind Mr. Magnum’s all-seeing private security empire.

(…and for once we mean that literally)! ARCHER versus ARMSTRONG! An incredible second identity for MARY-MARIA! Obadiah Archer gets a bold new role – and mission! The secret of the MASTER BUILDERS revealed! We were kidding, before but now we’re serious: This one changes EVERYTHING, and the Valiant Universe will never be the same again!

Across ten millennia and a thousand battlefields, Gilad Anni-Padda has traversed the darkest, most mysterious corners of history. But the horror and bloodshed of constant warfare has finally taken its toll on the man myth calls the Eternal Warrior…and he has abdicated his duties as the Fist and the Steel of Earth for a quiet life of seclusion. But when a blood vendetta from the distant past suddenly reappears in the modern day, he must decide if he will return to the ways of war…for the child who betrayed him thousands of years ago…

Out of the ashes of Harbinger Wars, Bloodshot is about to join the weaponized men and women of the HARBINGER ACTIVE RESISTANCE DIVISION – the black budget, technologically-augmented strike force where the powers are dangerously unstable and every mission is a one-way ticket into the meat grinder. With a reluctant leader calling the shots and a new crop of untested rookies manning the frontline, Bloodshot is about to take H.A.R.D. Corps behind enemy lines – and into a gasoline-drenched, synapse-snapping suicide run where no one is safe…and heroes always die trying.

The secret origin of all Shadowmen, past and present…

Long ago, in the antebellum South, Master Darque’s evil spawned the one thing that could stop him: the Shadowman. Now, for the very first time, discover how the dark roots of the Darques’ depravity has intertwined with Shadowman for more than a century and the betrayal that forged them both in this collection of acclaimed tales from some of comics brightest talents.