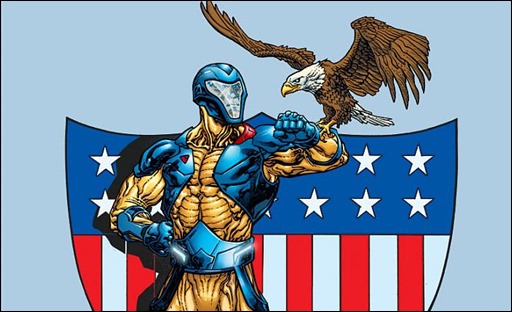 ALL-NEW ARC! START READING HERE! For every action, there is an equal and opposite reaction. First came UNITY… Now meet WEBNET!

Coming off of the earth-shattering

repercussions of their first mission, Ninjak is leading the newly formed Unity team right back into the trenches to face the Valiant Universe’s next colossal threat – the enigmatic Dr. Silk and his high-tech terror cell: WEBNET! With the fate of untold millions on the line, can this team of cutthroat heroes uncover Silk’s endgame – and his connection to Ninjak’s shadowy past? Move over, Harada – Matt Kindt and Valiant’s next superstar artist, CAFU (Action Comics), are about to bring the world’s next A-level enemy down on Unity with the force of a hundred hydrogen bombs.

That’s right, Valiant’s swashbuckling adventure duo have been targeted for elimination by Project Rising Spirit’s most elite kill crew. Their mission? Elimainte Obadiah Archer – or die trying. Hot off the secret revelations of Archer #0, the fight of the year begins right here in the landmark first issue of this special four-part crossover event!

Project Rising Spirit has sent Bloodshot and H.A.R.D. Corps, their all-or-nothing paramilitary team, after a rogue asset – an assassin-turned-leader of a global fundamentalist terror sect — and his immortal bodyguard. And their names just happen to be…Archer & Armstrong! Do Bloodshot and the steely killers of the H.A.R.D. Corps stand a chance against a teenager and a big sweaty drunk? The answer may surprise you!

QUANTUM AND WOODY: THE GOAT #0

Are heroes born…or are they bred?

Tom Fowler returns to QUANTUM AND WOODY for the thrilling and tragic life story of…Vincent Van Goat! Behold! A hero is born! A hero rises! We’re gonna level with you—you’re going to need to read this issue! Excitement and laughs and all that! Major repercussions for Quantum and Woody! Yes, seriously! Buy the issue and then see if we weren’t kidding!

What has become of the Bleeding Monk?

The Bleeding Monk, formerly Toyo Harada’s right hand, has been missing for over a year. Now, the original creative team of Joshua Dysart and Khari Evans are journeying into the darkest corners of the Harbinger Foundation to reveal the true whereabouts of Harada’s cryptic advisor – and uncover the first of many secret revelations to come…

A great and terrible loa of the Vodun pantheon is at large in the world of men…and its name is SHADOWMAN!

The only way to contain it: kill the man who houses the shadow, Jack Boniface — an innocent, cursed with possession and gifted with a tremendous power he doesn’t yet understand. But a force of nature known only as Tremble is spreading terror through the city of New Orleans. Turning Shadowman loose on his ancient rival, the god of fear, is either humanity’s best option…or impending disaster.

King Gilad Anni-Padda hoped to leave his days as the Eternal Emperor behind him.  But when an unforeseen challenger emerges from Gilad’s past, the king must put down his crown and pick up his sword! What strange journey has taken Gilad take across the alien landscape of 4001 A.D. – and what terror wrought in the modern day has led him to this terrible turning point?

To kill a king…they created an army.

The world’s most dangerous man, Toyo Harada, has been struck by the one thing he never thought possible – fear. Halfway across the globe, a new power threatens to topple modern civilization and, to preempt the cataclysm that is to come, Harada will unite the most unforgiving team the world has ever known – UNITY. Their mission: defeat the threat responsible for the destruction of MI-6, the decimation of an alien world, and the occupation of Eastern Europe… Unseat the warrior king armed with the universe’s most powerful weapon… Kill X-O Manowar!

So… two superheroes, a clone, and a goat move into a junior two-bedroom…

Imbued with unpredictable new superpowers in the wake of an energy experiment gone wrong, Eric and Woody Henderson have just had their lives turned upside down – and they need to KLANG together every 24 hours or else their atoms will disperse. So what do you do when the most annoying person in your life is also the only thing keeping you alive? You move in with him! And his goat. And his barely legal clone girlfriend. Besides, every team of heroes needs a secret headquarters…and this one has a slightly used hot tub. Plus: Quantum gets a job – and meets his first true blue super-villain!

Collecting QUANTUM AND WOODY #5-8 by acclaimed writer James Asmus (Thief of Thieves) and rising star Ming Doyle (Mara), get ready to kiss that security deposit goodbye when the world’s worst superhero team shacks up and breaks loose for an all-new adventure!

Your name is Angelo Mortalli. Your brother is trapped behind enemy lines and on the verge of — no. That’s not right. Your name is Raymond Garrison. You’ve retired from the dangers of the field, but a desperate plea from your oldest friend plunges you into a vicious firefight that — no. That’s not right, either. You are Bloodshot. You are the shade of gray that freedom requires. The perfect confluence of military necessity and cutting-edge technology. A walking WikiLeaks. A reservoir of dirty secrets that could set the world on fire. And you’ve just been captured.