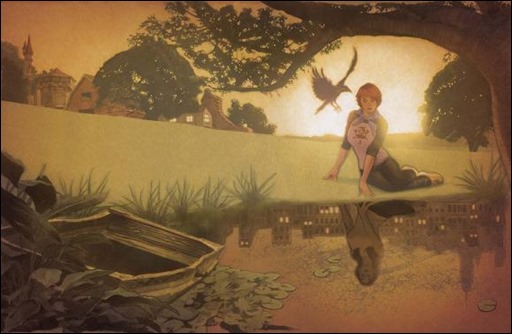 Here are the Vertigo Group solicitations for August 2013 courtesy of DC Comics. 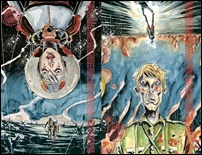 Art and covers by JEFF LEMIRE

It’s the year 3797, and botanist Nika Temsmith is researching a strange species on a remote science station near the outermost rim of colonized space. It’s the year 1921, and renowned English explorer William Pike leads an expedition into the dense jungles of Peru in search of the fabled “Lost Temple of the Incas,” an elusive sanctuary said to have strange healing properties. Two disparate souls separated by thousands of years and hundreds of millions of miles. Yet they will fall in love and, as a result, bring about the end of the universe. Even though reality is unraveling all around them, nothing can pull them apart. This isn’t just a love story; It’s the LAST love story ever told.

This amazing miniseries kicks off with 28-pages of story in a flip-book with two covers and two separate but connected stories!

Rose Red, as the human avatar of Hope, is inspired to gather her own knights and re-form the Round Table right on the Fables’ farm. Who will be Rose’s new recruits?

As the title promises, part 4 of “The Return of the Maharaja” is chock-full of “Death and Dismemberment.” Tensions come to a head between Nathoo and Buldeo in the expedition camp when the Dhole mount another attack, while the Maharaja and Nalayani face their ultimate fate in The Village of the Dead.

In “The Unwritten Fables,” part 3 of 5, Mister Dark finds an ally—someone who hates Tom Taylor more than he ever could, and knows where to hit him so it hurts the most. But as Mister Dark realizes the opportunity he’s been offered, the stakes go from high to terrifying for Tom and the Fables refugees.

In the midst of all-out battle between Honor Guard and the Skullcrushers in the mountains of Ecuador, we see the human cost, as HG support staff member Marella Cowper wades into the middle of it. Why is she there? What will she find? And why does she consider it all her fault? The award winning ASTRO CITY continues to explore life in a superhuman world. Featuring the second half of a diptych cover by Alex Ross.

“Brother” Lono must fight his animal urges for revenge after Sister June and Father Manny make a gruesome discovery on the grounds of the orphanage. But every dog has his day…

You are cordially invited to a party—to die for! This special features eight amazing stories set in the world of American Vampire, with “lost tales,” new characters and old favorites. Don’t miss these stories brought to you by series creators Scott Snyder and Rafael Albuquerque, as well as other awesome comics talent like Becky Cloonan (BATMAN), Gabriel Ba and Fabio Moon (DAYTRIPPER), Jeff Lemire (SWEET TOOTH), Greg Rucka (The Punisher, BATWOMAN), Gail Simone (BATGIRL) and many more!

Art and cover by SEAN MURPHY

“There’s something down there…”

A special behind-the-scenes look at Vertigo’s newest hit series. THE WAKE is a strange, epic tale with so much more broiling below the surface than meets the eye. This “Director’s Cut” will reprint the first issue, plus a variety of bonus features like character designs, script pages, black and white art and more to give you a glimpse of the creative process.

Based on the screenplay by QUENTIN TARANTINO

Here it comes: The shattering conclusion of the ultimate uncut adaptation of the Oscar® winning western from Quentin Tarantino—which now runs to a seventh smashing issue!

They call it a “Bubbleverse.” Not quite an alternate reality but a pocket universe—like a soap bubble forming on top of another soap bubble—that mirrors our own. People from our world are trapped inside, and FBP field-agents Adam and Jay volunteer for a daring rescue mission before a devastating collapse. But things are not what they seem: There’s a traitor in the Federal Bureau of Physics, and things are falling apart…

Art and cover by CLIFF CHIANG

Legendary singer-songwriter, musician and activist Neil Young brings one of his most personal albums, GREENDALE, to comics. In the fall of 2003, as the nation gallops into war, a politically active teenaged girl named Sun lives, loves and dreams in a California town named Greendale. And when a Stranger comes to town — a character whose presence causes Greendale to, well, go to hell — she’ll find herself on a journey both mystical and mythical.

In this new trade paperback collecting PREACHER #13-26, Jesse Custer, his girlfriend Tulip and their vampire friend Cassidy head west to a party of Babylonian proportions. Then Jesse flies to France to rescue Cassidy from the clutches of religious fanatics. His search leads him into battle against the forces of the mysterious organization known as The Grail.

TOM STRONG AND THE PLANET OF PERIL #2

Art and cover by CHRIS SPROUSE and KARL STORY

Tom Strong and Val Var Garm have reached Terra Obscura, but the help they sought is still out of reach. New Lancaster has been devastated, and their investigation is met with resistance from a local mob of anti science-hero vigilantes.