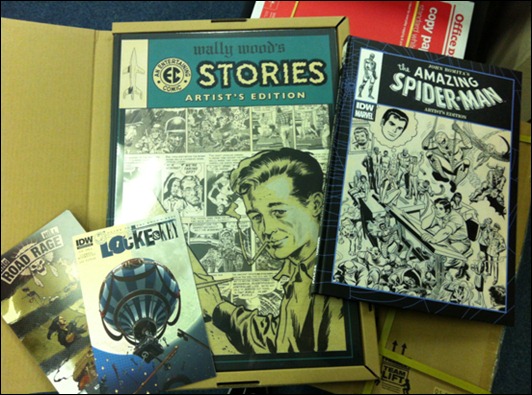 IDW is thrilled to announce its jam-packed schedule of events and exclusives for WonderCon 2012, taking place March 16-18, 2012 in Anaheim, CA.  IDW will be located in booth #301. Follow the thunderous echo of triumphant high fives.

This year’s show promises treasures of epic proportions to be unleashed on convention-goers.  Among other delights, IDW is pleased to offer -exclusive editions of two of our most popular Artist’s Editions.  We’ll be offering an exclusive variant of the wildly popular Wally Wood’s EC Stories Artist’s Edition and a very special edition of John Romita’s Amazing Spider-Man Artist’s Edition signed by Romita and Stan Lee and including a sketch by the legendary Romita himself!

In addition to exclusive merchandise, we’ll also have some top-flight talent on hand to ensure and commemorate what is sure to be total convention domination.  Joe Hill will be appearing at our booth and in his very own spotlight panel. Steeped in mystery as thick as his beard, it stands to reason Joe might have some exciting announcements to make.* If one best-seller wasn’t enough to pack the house, we’re also welcoming Teenage Mutant Ninja Turtles co-creator Kevin Eastman, who will be providing pizza to anyone with a convention badge*, and 30 Days of Night and Frankenstein, Alive, Alive! creator Steve Niles, who will be taking blood from convention goers, we’re hoping for the Red Cross and not just for fun.

IDW will also be hosting a few panels during the show including IDW Presents: The IDW Panel! with Chief Creative Officer Chris Ryall and a murderer’s row of creators and Spotlight on Artist’s Editionswith Special Projects Editor and Lord of Giant Books Scott Dunbier! Any convention goers in search of reality-quaking announcements should consider attendance at these panels mandatory.

Please see the schedules below for detailed signing and panel information as well as a list of the amazing exclusive merchandise that will be flying out of our booth.

CHECK OUT THESE CONVENTION EXCLUSIVES:

Don’t get chumpatized!  Check out these IDW Panels!

4:30-5:30 Spotlight on Renae De Liz
Meet one of the rising stars of the industry! Acclaimed artist and WonderCon special guest Renae De Liz(The Last Unicorn) was building a rabid following even before she masterminded the Kickstarter runaway smash success project Womanthology! Room 203

7:00-8:00 IDW: Spotlight on Artist’s Editions
Join IDW Senior Editor Scott Dunbier for an in-depth discussion of the publisher’s massively successful Artist’s Edition line! Launching in 2009 with Dave Stevens’ Rocketeer, and continuing last year with Walter Simonson’s The Mighty Thor,  and this year with John Romita’s Amazing Spider-Man, and a host of others, these brilliant tomes have turned the industry on its ear by having their pages scanned directly from the original art! Come hear exciting announcements about upcoming additions to the line! Room 204

Saturday, March 17
11:00-12:00 Womanthology
Get the story behind the hottest Kickstarter project of the year, a graphic novel produced entirely by the top women in the industry! Over 200 creators combined to create Womanthology,  and all profits go to the charities of GlobalGiving.org! Project mastermind Renae De Liz and a host of surprise creators offer sneak peeks, inside tips on how to break into comics, and more! Room 213

1:00-2:00 Spotlight on Joe Hill
Eisner-Award winning creator of Locke & Key, talks about the final chapters of the series, who will be the next person to wear The Cape, IDW’s Road Rage, his next novel (and accompanying comic series), and future projects. His discussion with editor Chris Ryall will be followed by a Q&A and pole-dancing demonstration. Room 213

6:00-7:00 Horror in Comics
Whether it in movies, TV shows, books, or comics, everyone loves to be scared. This panel focuses on horror in comics with WonderCon special guests Joe Hill (Locke & Key), Rebekah Isaacs (Angel & Faith), Mike Mignola (Hellboy, B.P.R.D.), Eric Powell (The Goon), and Scott Snyder (American Vampire), as they talk to the not-scary-at-all Mark Waid about things that go bump in the night in comic books. Room 213

Sunday, March 18
12:30-1:30 Spotlight on Steve Niles
WonderCon special guest Steve Niles (creator, 30 Days of Night), talks about his career, including his new ventures in film (Remains, based on his zombie comic story and appearing on Chiller Network) and what’s coming up next for him with fellow writer Joshua Fialkov (I, Vampire). Room 211

Visit IDWPublishing.com to learn more about the company and its top-selling books. IDW can also be found at http://www.facebook.com/#!/idwpublishing and http://tumblr.idwpublishing.com/ and on Twitter at @idwpublishing.