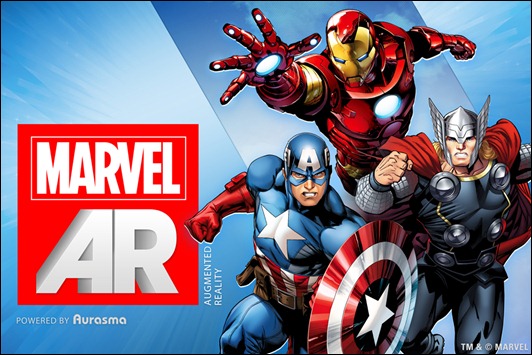 Aurasma will be releasing their Augmented Reality app on April 2nd as part of Marvel Comics’ Marvel ReEvolution Initiative.

The Marvel AR app will be powered by Aurasma and will be released on April 2, 2012 for iOS and Android devices.

You can read the Marvel ReEvolution announcement here.

Yesterday, at the SXSW Interactive Festival, Marvel Entertainment unveiled Marvel AR, the first major augmented reality app from a comic book company. As part of the recently announced Marvel ReEvolution, which brings the world of print and digital media together for a comics experience like never before, the Marvel AR app powered by Aurasma will be released on April 2 for iOS and Android devices. Fans can first discover the power of this new app in Avengers VS X-Men #1, arriving in comic stores on April 4 and kicking off the comic book event of the year in which the world’s most popular Super Heroes go to war!

By opening this app and scanning select Marvel products featuring the Marvel AR logo, you’ll unlock exclusive content starring the world’s most popular super heroes — including Iron Man, Thor, Captain America, Spider-Man, Wolverine, Hulk and many others! Go behind the scenes of your favorite comics, see new footage, hear from creators, get caught up on past events and more!

“It’s time to join the Marvel ReEvolution, as we bring the worlds of print and digital media together for an unprecedented fan experience,” said Peter Phillips, senior vice president and general manager, Marvel Digital Media Group. “Avengers VS X-Men is the biggest story we’ve ever told and teaming with Aurasma allows us to bring our fans a deeper experience when they purchase select Marvel comics and other Marvel products. Just wait till you see what we’ve planned!”

Marvel partnered with Aurasma, the world’s leading augmented reality platform, to create a mobile experience designed to empower fans to discover a new world of content that brings their favorite Super Heroes to life through tablets and mobile devices. Aurasma’s cutting-edge image recognition technology enables the Marvel AR app to recognize images in new Marvel comic books, promotional posters and other merchandise, seamlessly augmenting the images with interactive virtual content such as videos, animations and more.

“Marvel is no stranger to digital media and is once again making history, this time by using Aurasma’s transformative technology to bridge the physical world with the virtual,” said, David Stone, Aurasma’s director of client services. “What better way to excite and engage fans than to give them the power to interact with all of their favorite characters in a new way?”

Aurasma’s free platform unlocks a whole new dimension for partners to creatively enhance the real world. In this case, comic books will reach new depths by unleashing coveted and fan-pleasing content like director and editor commentary and other special features, only accessible through the Marvel AR app.

The Marvel AR companion app, powered by Aurasma, will be available for free in April at the Apple App Store and Android Market.