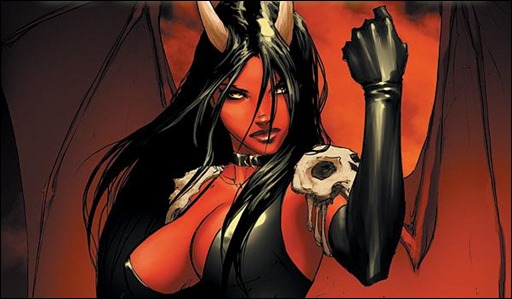 Dynamite first announced the upcoming Chaos! miniseries during New York Comic-Con 2013, identifying the event as a cornerstone in their celebration of ten years as a comic book publisher. CEO and Publisher Nick Barrucci says, “The year 2014 holds special meaning for the folks at Dynamite, and our staff’s decade of hard work has given us an opportunity to see – and serve as the publishing home for – the 20th anniversary of the groundbreaking Chaos! Comics line. Let the spine-chilling, gut-wrenching, mind-blowing shenanigans of Evil Ernie and friends commence!”

In the upcoming miniseries, several terrifying figures – including the undead Evil Ernie, goddess Purgatori, vampire Chastity, and supernatural band of misfits known as The Omen – individually witness visions of the world’s impending doom, and rush headlong into conflict. Some try desperately to avert the nuclear holocaust, out of altruism or self-interest, while others just want to raise some hell. So begins the return of the Chaos! universe on an epic scale, the resurrection of fan-favorite boogeymen and femme fatales amidst a violent, apocalyptic upheaval.

Thanks to a monumentally successful run in the 1990s, the Chaos! Comics universe appealed to a huge demographic of comic readers, those who were – as Seeley puts it – looking for “something dangerous, scary, and sexy to read. Chaos! was like punk music, late night horror movies, and a lingerie catalog rolled into one perfect creation.” Dynamite gave that fan base a hint of the new Chaos! to come when they released the 2012/2013 Evil Ernie miniseries to fan and critical acclaim.

Chaos! #1 will feature a wide selection of cover variants, presented by some of comics’ most talented artists. The Main Cover will be supplied by J. Scott Campbell (Danger Girl). Variant Cover A will feature the artwork of writer Tim Seeley himself, while Variant Cover B showcases Emanuela Lupacchino (Ghost Rider). A Subscription-Only Variant Cover, intended as a reward for dedicated fans who preorder with their local comic shop retailers, will feature the art of Carlos Rafael (Warlord of Mars: Dejah Thoris). A Blank Authentix Cover will be created for the first issue, featuring blank white space on the cover perfect for convention artist commissions or the creative whims of the do-it-yourself fan.

In addition to the Retailer Incentive Original Art Covers, Dynamite Entertainment is offering other special opportunities for retailers to support the Chaos! launch in a big way:

Chaos! #1 will be solicited in Diamond Comic Distributors’ March Previews catalog, the premiere source of merchandise for the comic book specialty market, and slated for release on May 7, 2014. Comic book fans are encouraged to reserve copies of Chaos! with their local comic book retailers. Chaos! will also be available for individual customer purchase through digital platforms courtesy of Comixology, iVerse, and Dark Horse Digital. 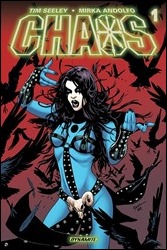 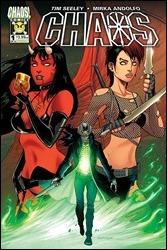 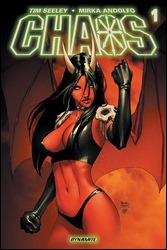 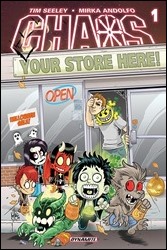 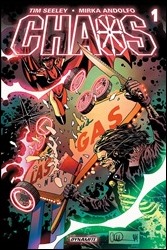 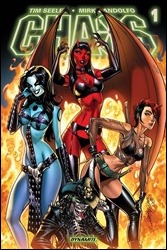