MARVEL COMICS New Prose Novel, CIVIL WAR, To Be Published in GraphicAudio®… A Movie in Your Mind® Audio Entertainment 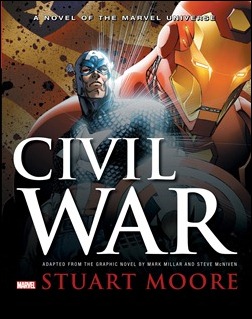 Marvel Comics’ new prose novel, CIVIL WAR, will be adapted to GraphicAudio®…A Movie in Your Mind® audio productions. The Cutting Corporation and Marvel Entertainment have entered into a licensing agreement where four of Marvel’s prose novels will be released in the GraphicAudio®…A Movie in Your Mind® unique audiobook format.  GraphicAudio® audio productions are six hours on average of action packed audio entertainment with sound effects, cinematic music, narration and a full cast.

CIVIL WAR adapted by Stuart Moore (Wolverine) is a story that altered the Marvel Universe.  “In the wake of a tragedy, Capitol Hill proposes the Superhuman Registration Act, requiring all costumed heroes to unmask themselves before the government. Divided, the nation’s greatest champions must each decide how to react — but will you side with Iron Man or Captain America? And just which heroes will pay the ultimate price?”

Anji Cornette, Executive Producer at GraphicAudio® says, “We are very excited to be working with Marvel and to have this opportunity to publish CIVIL WAR in our GraphicAudio®…A Movie in Your Mind® audio entertainment format and I know with certainty that our fans are going to be looking forward to the release.”

“CIVIL WAR is one of the most popular and resonant Super Hero stories of all time, full of the action, drama and intrigue that make it so perfect for the GraphicAudio format,” said Ruwan Jayatilleke, Associate Publisher & Senior Vice President, Print, Animation and Digital Media, Marvel Entertainment. “Working with The Cutting Corporation allows us to deliver this epic conflict between the heroes of the Marvel Universe, led by Iron Man and Captain America, in a way fans haven’t ever experienced before!”