Challengers of The Unknown #4 by Jack Kirby!

Today’s page is from Challengers of the Unknown #4 “The Wizard of Time, Chapter II: The Men Who Rode Across The Sun” (Oct. 1958) written & penciled by Jack Kirby and inked by Wally Wood & Roz Kirby.

This issue is not only in the capable hands of the legendary Jack Kirby, but the great Wally Wood and Jack’s own wife Roz help out with the inking chores!

Strange things are happening; ancient Egyptians are swiping telescopes and ancient Greeks are stealing bi-planes! It’s time to call the Challengers of the Unknown – “Four men of reckless courage who have often come to grips with perils that lurk in the shadows outside the knowledge of man!” Now that’s a mouthful!

A captured ancient Greek prisoner leads the Challengers to the “Island of the Wizard” that houses a lab for scientist Darius Tiko, who doesn’t “think it’s against the law to experiment with time travel.” Tiko is quite the traveller as well, he’s “hunted dinosaur with an elephant gun” & filmed “the ancient civilization of the Mayas” way of life.

Tired of his interrogation by the Challengers, Tiko jumps into a metal cube and disappears into time. They notice a smaller box, but they’re not sure of how to operate it. Never fear! After a quick search of the lab, they find Tiko’s notes and in near record time they learn how to operate it!

It’s time for two of the group, Ace Morgan & Rocky Davis, to jump in the box and chase a crazy scientist through time! 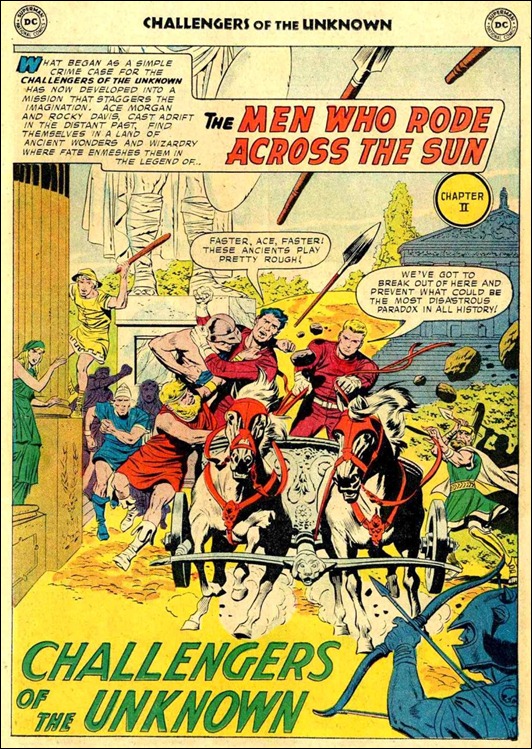