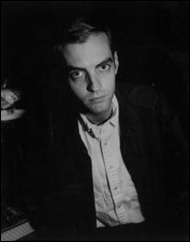 Daniel Clowes is best known for his work on the

comic series Eightball and Lloyd LLewellyn, and his graphic novels Ghost World, Wilson, David Boring, and Mr. Wonderful. Clowes has also written two screenplays adapted from his Eightball stories, Ghost World and Art School Confidential, both of which were directed by Terry Zwigoff.

Along with winning numerous Harvey Awards, including Best Writer in 1997 and 2005, Best Cartoonist in 2002, and Best Single Issue or

In October 2011, Drawn & Quarterly will publish The Death Ray, a story published in Eightball #23, as a Hardcover Graphic Novel.

Congratulations Daniel Clowes on your award and all the great work you’ve published over your career!

PEN Center USA, one of two centers in the United States and the third largest in the world, was founded in 1943 and incorporated as a nonprofit association in 1981. PEN Center USA’s membership of more than 800 writers includes poets, playwrights, essayists, novelists (for the original letters in the acronym, “PEN”), as well as television and screenwriters, critics, historians, editors, journalists, and translators.

PEN Center USA strives to protect the rights of writers around the world, to stimulate interest in the written word, and to foster a vital literary community among the diverse writers living in the western United States. The organization, therefore, has two distinct yet complementary aims: one fundamentally literary and the other having a freedom of expression mandate. Among PEN Center USA’s various activities are public literary events, a mentorship project, literary awards and international human rights campaigns on behalf of writers who are censored or imprisoned.