Dark Horse Comics is proud to announce twelve new creator-owned series from twelve creative teams that will take the world’s most popular art form to new levels through 2015!

Over twelve days, Dark Horse Comics debuted a new series exclusively through various media partners. With Comic-Con International commencing, Dark Horse gives you everything you need to know about the next wave of critically acclaimed titles from the biggest independent publisher in comics!

For a complete list of signing times and panel schedules, visit DarkHorse.com or stop by booth #2615 at San Diego Comic-Con!

Life goes on for Declan Thomas after his deadly encounter with the psychotic Nimble Jack, but Declan’s strange powers continue to develop, offering him a profound connection with the nature of insanity. Little does he know that the malevolent Swivel wishes to pick up where Nimble Jack left off!

Bloody Disgusting has the exclusive interview with Paul Tobin! 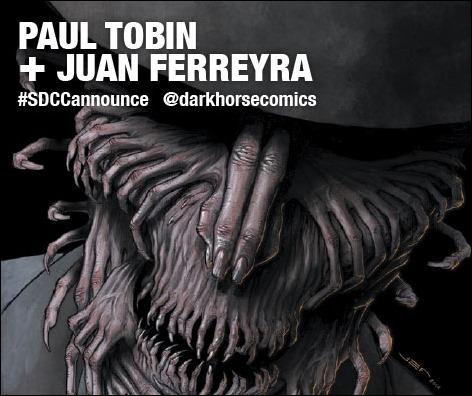 Hellboy and the B.P.R.D.

A bizarre series of murders and rumors of something worse lead Professor Bruttenholm to send a young Hellboy to a Brazilian village on his first mission. Hellboy and a small group of agents uncover something terrible in the shadows of a sixteenth-century Portuguese fortress . . .

Nerdist has the exclusive interview with artist Alex Maleev! 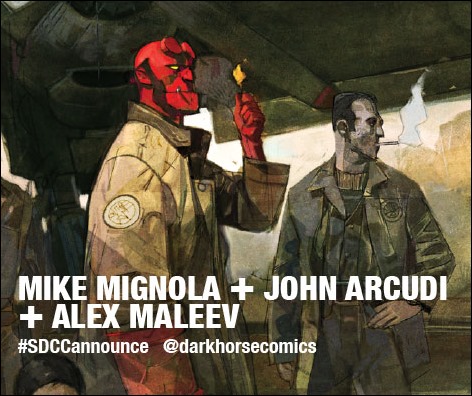 The Schullers are every bit the American family: father, mother, and twin girls. Daddy has a good job, and though he works in the city, he can afford a nice house for his family in the suburbs. It’s a good place for the kids to grow up, away from the crime and questionable morals of city life. But what if the crime and the violence aren’t that far away? What if Mom isn’t just a housekeeper and a cook, but she’s also a highly paid professional assassin?

ComicsAlliance has the exclusive interview with Joëlle Jones! 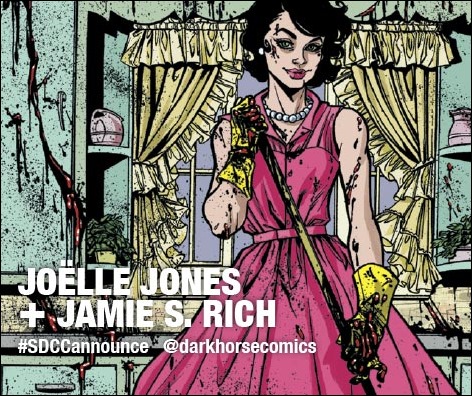 It’s 1940, and a phony body on exhibit in a carnival sideshow suddenly springs to life and shambles away. Not so phony after all, he is John Doe, radio commentator and archenemy of Detroit’s notorious Purple Gang. But why did he disappear in 1930, and why did the mayor, the mob, and the cops all want him dead?

Bloody Disgusting has the exclusive interview with Bill Morrison! 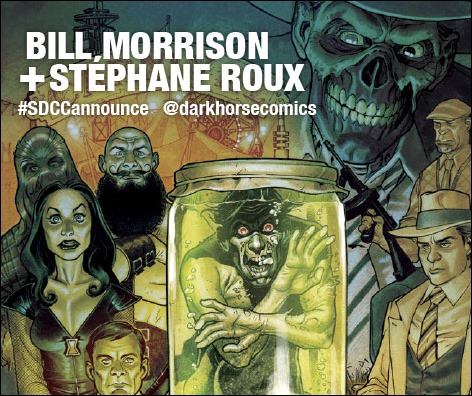 Welcome to the Meld, an inhospitable dimension in time where Joshua, a chrononaut, finds himself trapped. With no memory or feedback from the team of scientists that sent him there, he can’t count on anything but his heart and a stranger’s voice to guide him to his destiny.

Visit io9 for the exclusive interview with Rafael Albuquerque! 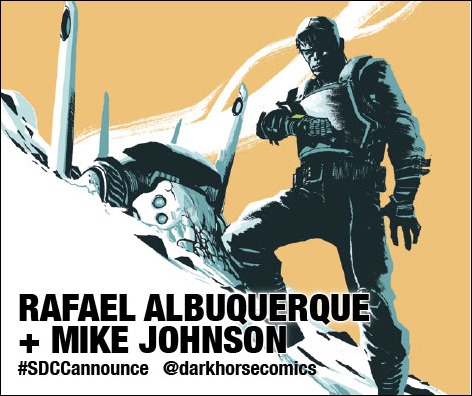 In what world do you belong?

Neverboy, an abandoned imaginary friend, wants the real world. Julian Drag, a struggling artist, wants the imaginary.
When Neverboy’s drugs wear off, the surreal hangover he’s been running from sets in. And a trip down the rabbit hole is just what Julian has been dying for. When these two meet, the real and the imaginary worlds collide in absolute chaos. Julian and Neverboy, the dreamer and the dream, will have to face who they are in order to put things right again. 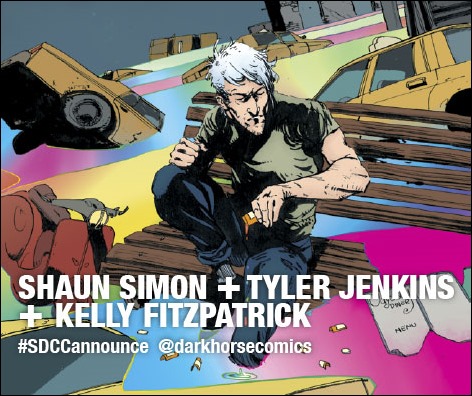 They were the greatest heroes of a lost era. But the age of heroes is over, and Abraham Slam, Col. Weird, Golden Gail, Barbalien, and Madame Dragonfly have been wiped out of continuity! Following a cosmic battle known only as the Event, the heroes awoke on a farm in a small town they are unable to leave, with the massive iron hammer of a fallen teammate the only reminder of the world they came from. As their tenth anniversary on Black Hammer Farm nears, they’ve largely given up on any chance of return, until the arrival of the Black Hammer’s daughter throws their new existence into chaos! The Black Hammer is part human drama, part multiverse-spanning adventure, and part journey into the DNA of the superhero genre!

Comic Book Resources has the exclusive interview with Jeff Lemire! 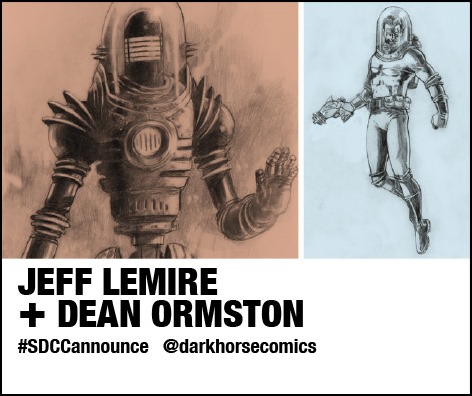 When a deep-time research mission goes awry, four future explorers find themselves stranded in our present, where a side effect of their mission grants them unexpected immortality! As further time breaches cause dinosaurs to appear in Greece and buildings from the future to crash into Toronto, the unlikely heroes find themselves humanity’s best line of defense from the onslaught of time itself! The team achieves worldwide fame, and their adventures become more and more bizarre, even as their failure to get back to their own time leads to infighting and catastrophe!

Comic Book Resources has the exclusive interview with Matt Kindt! 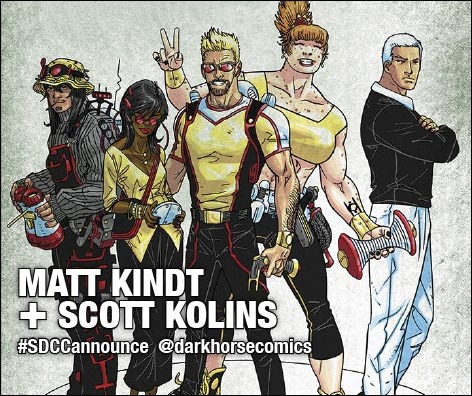 From Brian Wood, the creator of DMZ, Northlanders, and The Massive, comes Rebels, a gritty, ground-level look at the men and women who fought to win independence from tyranny and those who would stand in their way.
Cocreator Andrea Mutti (The Girl with the Dragon Tattoo) illustrates the opening story, introducing us to the Green Mountain Boys, America’s first militia, and one young couple’s journey across the battlefields of New England. Colorist Jordie Bellaire and cover artist Tula Lotay complete the team with gorgeous palettes and striking illustrations.

Nerdist has the exclusive interview with Brian Wood! 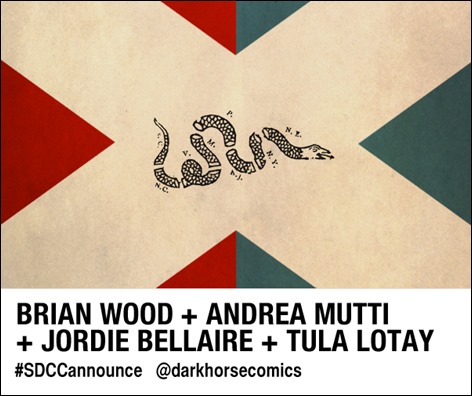 “Her earliest memories were of the taste of freshly turned earth and the bleating of goats.”
There’s them that say you ought not get lost in Harrow County. Because once you lose your way among the pines and briar thistles and those sweet-smelling scuppernong, you won’t never find your way back. Born on the very day a hateful witch was put to violent death, seventeen-year-old Emmy has always felt a bit lost . . . but never alone. The deep, dark woods surrounding her home crawl with ghosts, goblins, and the restless dead. These haints whisper to Emmy, promising her that she has great power, warning her that the people of Harrow County want her dead.

Comic Book Resources has the exclusive interview with Cullen Bunn! 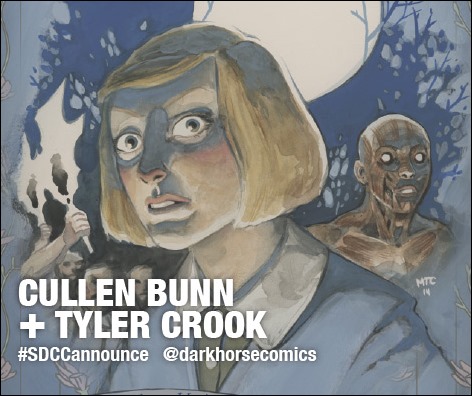 Alabaster: The Good, the Bad, and the Bird

A year after Dancy Flammarion’s death in a burning barn, her seraph comes to collect her from a hell of her own creation. A new evil haunts the sun-scorched back roads and ghost towns of the American South: murderous twins who command a legion of ghouls. Once again, Dancy must face down demons, both those who walk the world unchallenged and those in her own shattered mind.

The Mary Sue has the exclusive interview with Caitlín R. Kiernan! 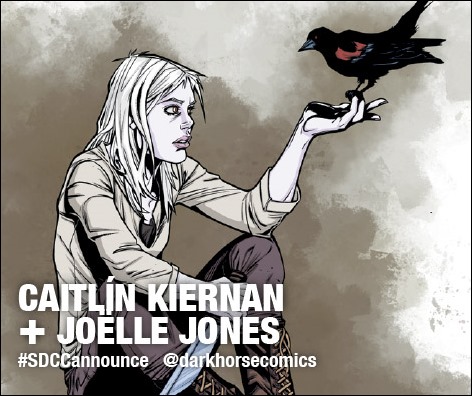 The first rule is you don’t talk about it.

USA Today has the exclusive interview with Chuck Palahniuk!

Comic Book Resources has the exclusive interview with Cameron Stewart! 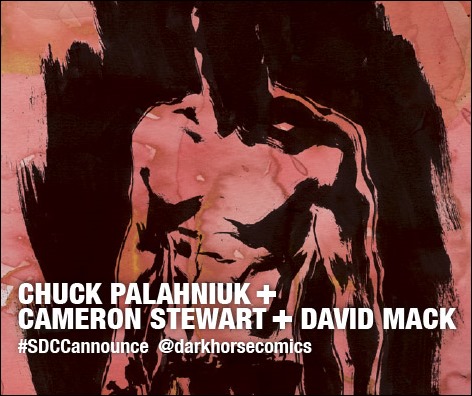