Your First Look at Kieron Gillen and Dan Mora’s ONCE & FUTURE #1 From BOOM! Studios 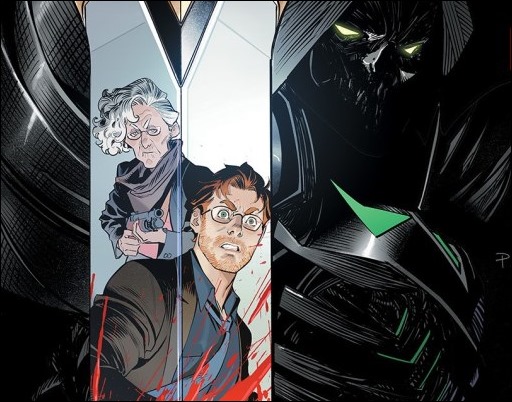 Here’s your first look at a few pages from Once & Future #1, an original series by writer Kieron Gillen and artist Dan Mora, on sale August 14th, 2019 from BOOM! Studios.

BOOM! Studios revealed a first look at ONCE &  FUTURE #1, an extra-sized issue kicking off an all-new limited series from New York Times bestselling writer Kieron Gillen (The Wicked + The Divine, Star Wars) and Russ Manning Award-winning artist Dan Mora (Buffy The Vampire Slayer, Klaus), introducing retired monster hunter Bridgette McGuire and her unsuspecting grandson Duncan as they prepare for battle against a rising evil that plans to take over the country to bring it back to its former glory.

Duncan McGuire is having a terrible day and a terrible date when his grandmother’s retirement home calls with an emergency. Little does he know, the emergency is actually the emergence of a villain from Arthurian legend, being summoned back from the dead by a group of Nationalists to serve their cause. And the only person who knows how to stop them is . . . his grandmother, Bridgette McGuire, ex-monster hunter and lifelong badass.

Duncan is soon swept up into a world of magic and myth as he comes face-to-face with the legends from England’s past and his own complicated family history, as he and his gran fight for their country’s future.

Print copies of ONCE & FUTURE #1, featuring a cover by Dan Mora, will be available for sale on August 14, 2019 at local comic book shops (use comicshoplocator.com to find the nearest one) or at the BOOM! Studios webstore. Digital copies can be purchased from content providers, including comiXology, iBooks, Google Play, and the BOOM! Studios app.

For more on ONCE & FUTURE and more from BOOM! Studios, stay tuned to www.boom-studios.com and follow @boomstudios on Twitter.