EVERYONE’S TRASH IS ONE MAN’S TREASURE IN GREAT PACIFIC 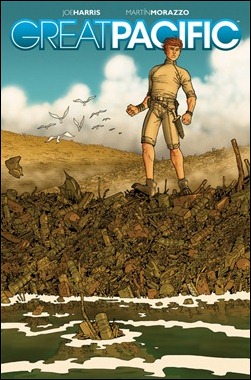 In reality, the Great Pacific Garbage Patch is a huge vortex of tiny plastic particles, but in the public imagination — and in the new Image Comics series GREAT PACIFIC by Joe Harris (Ghost Projekt, The Fury of Firestorm) and Martín Morazzo — it is an island of trash. Starting in November, Harris and Morazzo create a whole world from this image — a world ripe for conquest.

In GREAT PACIFIC, Chas Worthington, the twenty-three-year-old heir to the world’s biggest oil fortune, takes on the Great Pacific Garbage Patch, leaving his privileged life to try to make a difference in the world.

"Chas has a noble heart, but human frailties," said writer Harris of GREAT PACIFIC’s protagonist. "He wants to solve this massive environmental problem but he’s going to do it his way and by his rules. He doesn’t just mean to clean up the Great Pacific Garbage Patch. He means to conquer it."

In drawing this world of detritus where Chas contends with, as Harris describes them, "the elements and hostile tribes indigenous to the surrounding area, marine life that’s been mutated by the pollution, pirates and even the United States’ Navy," Morazzo has taken on a hefty challenge.
"The Patch itself becomes a character throughout the story, along with the strange new inhabitants that come to live both atop it, and under its surface!" said Morazzo. "I love just letting myself go while drawing the trash continent. It’s a lot of work, but in some ways it is relaxing too!"

The creative team hopes to get readers’ heart rates up as they follow Chas’s struggle to conquer and hold this new frontier.

"This isn’t just some preachy call for conservation and recycling," said Harris. "With GREAT PACIFIC, I’m out to tell a pulse-pounding story of survival and adventure."

"I love how the story develops," Morazzo added. "Joe has me always wondering what’s next."

GREAT PACIFIC is a full-color, monthly series debuting on November 7. Its first issue (SEP120391) is available for pre-order in the September issue of Previews.