Superman, Batman, and Wonder Woman Come to the Library of American Comics 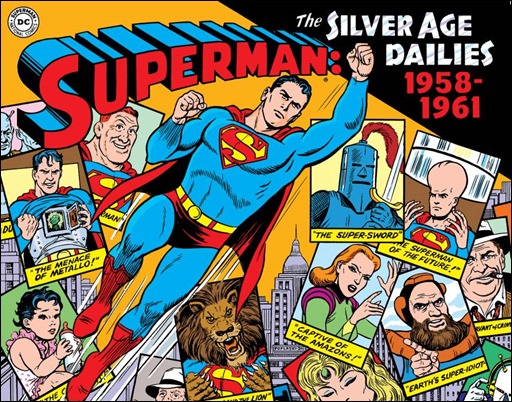 IDW’s Library of American Comics and DC Entertainment proudly announce the beginning of a new partnership to reprint some of the rarest DC Comics stories — the Superman, Batman, and Wonder Woman newspaper strips.

“We’re thrilled to announce a comprehensive publishing program for these historic strips,” said Greg Goldstein, IDW President and COO. “The Library of American Comics is the premier home for archival newspaper strips and this new partnership with DC Entertainment further cements the imprint’s reputation as second to none.”

At the same time that Superman, Batman, and Wonder Woman became the world’s most famous and recognizable superheroes in comic books in the 1940s and beyond, they also starred in runs of newspaper comic strips, most of which have not been seen since they first appeared.

The Man of Steel’s newspaper adventures ran for more than 25 years, from 1939 until 1966. Only about 10% of these strips have ever been reprinted. The complete comics will be released in three sub-sets, starting with The Silver Age, then The Atomic Age, and finally, The Golden Age. The black-and-white daily and color Sunday strips contained distinct storylines and will be released in separate, concurrent, series of deluxe hardcovers.

The line kicks off this July with SUPERMAN: THE SILVER AGE NEWSPAPER DAILIES, VOL. 1: 1958-1961. Fans can look forward to nearly 800 strips featuring classic artwork by Curt Swan, Wayne Boring, and Stan Kaye. While most of the stories from the Atomic Age and Golden Age were original and completely different from the comic books, under Mort Weisinger’s editorship in the late 1950s Silver Age stories, Superman co-creator Jerry Siegel was brought in to script adaptations of then-current comic book tales.

Covers for each book are being specially created by Pete Poplaski to evoke the look and style of the times; Volume One is an homage to Curt Swan’s art and Ira Schnapp’s lettering design. Tom DeHaven, author of the novel It’s Superman!, is writing the foreword, and the introductions are by Sidney Friedfertig.

Additional details on the Sunday strip books as well as the Batman and Wonder Woman collections will follow, but eager fans should begin watching the skies in July!