Doomsday +1, published by Charlton Comics and running 6 issues back in the mid-1970’s, was John Byrne’s first original, color comics series. In the mid-1980’s, Fantagraphics reprinted the series with all-new covers and back-up stories as The Doomsday Squad.

This May, IDW Publishing & John Byrne are bringing back the concept as a new four issue miniseries entitled Doomsday.1.

IDW Publishing is happy to announce DOOMSDAY.1, a new four-issue miniseries coming in May from legendary comics mastermind John Byrne! Harkening back to Byrne’s earliest days in comics, DOOMSDAY.1 tells the thrilling tale of seven adventurous astronauts, who watch in horror, aloft in the International Space Station, as most of Earth is annihilated by a titanic solar flare.

“I’ve been thinking for some time that I would like to revisit a post-apocalypse kind of scenario, such as was seen in my very first ‘dramatic’ work in comics, but this time without the more obvious fantasy elements of that original series (mermaids, alien robots, frozen mammoths, etc.),” said Byrne. “When bits and pieces of this new series first started to percolate around in my head, I knew almost at once the shape that ‘revisit’ would take; something in the ‘All-New, All-Different’ vein. And the first time I doodled some images of my ‘crew,’ I knew I was there!"

When all communication is lost and their home appears destroyed, what are the intrepid astronauts to do? Prepare to cling to a new life in zero gravity, waiting for the space stations supplies to dwindle to nothing? That doesn’t sound very adventurous, now does it? No, the true thrills of DOOMSDAY.1 come when the seven stranded heroes descend back to their decimated home world to confront the dangers left behind by the universe’s cruel ravaging!

“As much as I enjoyed seeing John work on the various licensed titles we’ve done, it’s a continued blast to work with him in developing new concept after new concept this year,” said Chris Ryall, IDW’s Chief Creative Officer/Editor-in-Chief. “If Earth has to be destroyed in a flaming conflagration, there’s no one I’d rather see bring that carnage and its aftermath to life than JB.”

This May, a brave new world comes with a brave new series. Don’t be left behind as John Byrne embarks on this fantastic new voyage! Fans will be treated to Byrne on full-color art and writing duties and subscribers will receive a special wraparound subscription variant, packed full of the John Byrne sci-fi magic we all know and love! 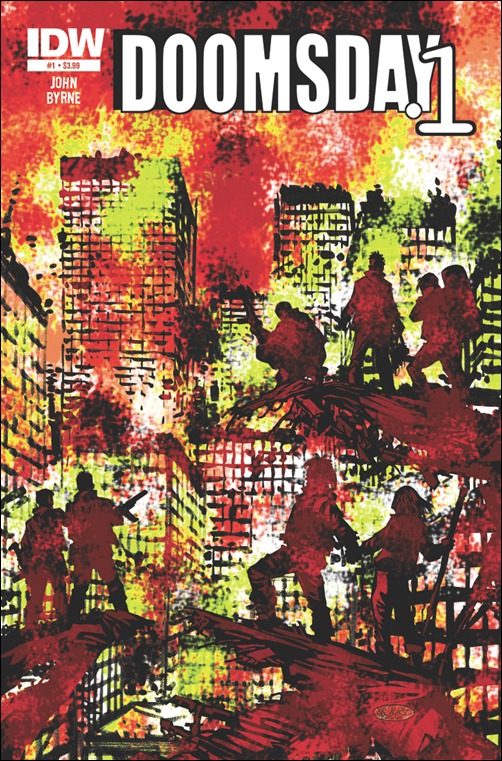