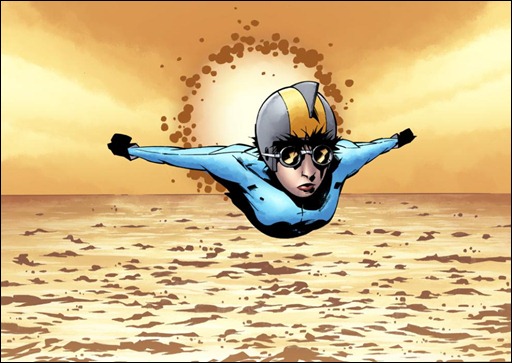 In this first story we are introduced to Jet Girl herself and the mysterious English covert agent Magistrate Mod, along with her most feared enemies. Who may or may not have ulterior motives behind controlling the Lunar Nazi movement. Through, skill, luck and puberty Jet Girl saves the moon and the day while learning that Mod might know more than he lets on.

The 2nd chapter takes us 2 months from the Moon incident where Isla and J.H. have hired the great great grandsons of the Red Barron; two bi wing pilots obsessed with David Bowie and Jet Girl. It’s low-tech versus high-tech in this high flying adventure! All the while Audey/Jet Girl is being watched by a mysterious woman whose intentions are not yet clear, building up to the shocking answer that follows in chapter 3.

The 3rd and final chapter of the 80-page Graphic Novel is the confrontation between Audey and the original Jet Girl Cassandra Roe. While earlier stories are very light-hearted this issue shows how Jet Girl can be very diverse in story and atmosphere. In this final conflict we learn the past of the "Jet Girl" program and the dark secrets that were hidden from our hero. A choice must be made by Audey/ Jet Girl while her views about the program and country are shattered. Only reading will you know what decision she makes for her future and involvement in the Jet Girl program.

As Fox says: "Through the years, I have seen a lot of comics/movies come out where the leading lady was either this un-killable beast or some prissy runway model. I hated that idea, I felt there was no middle ground. Why can’t a female lead be strong and fragile at the same time? Like a Marion Ravenwood of Raiders of the Lost Ark fame. I wanted people to see Jet Girl as this bad ass spy, who at times, could be rescued or be the rescuer. That she wasn’t already some unstoppable force, but through the story she learns to become something more and the reader could progress as she does. 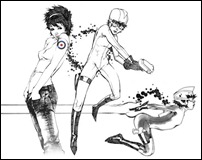 What we wanted from all this was to, yes, selfishly show off our talents, and to create a character that women and men could find appealing and look up to, breaking the barrier of guys only read about guys and girls only read about girls. I wanted Jet Girl/Audey to be a hero for all, someone you could root for and also be fearful for, that she might die in the next issue. Jet Girl is a comic that can be enjoyed by any age.."

The only draw back to creating Jet Girl is that Jacob Crippen works a full-time construction job to support his family, while Justin Lee Fox is full-time caretaker for his 77-year old Grandmother, who had a massive stroke a year ago. They are two dreamers doing what we can to get by and make sure their families are taken care of, while still trying to bring to life a passion they have fought so hard for and have given massive amounts of effort into doing. 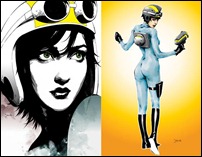 Justin continues to say: " The idea might be simple but it is far from unoriginal. We believe the draw of this book will be that the main protagonist is not only female, but one that does not intimidate a male audience nor turn off a female following because she is an overly girly character that just happens to also save the world. Also adding: " We wish to use Diamond to reach the mainstream comic book stores but it takes a few issues in the can, pre-ordered and paid for before we see any returns. All funds from our Kickstarter campaign, if successful, will go directly to completing and printing the first few books. Specifically, it will cover the costs of talent, 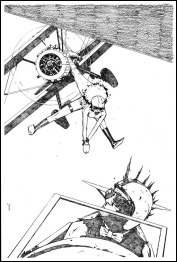 In a comic world saturated by male heroes it is refreshing to have a female character that does not try to be overly masculine, but is comfortable being a feminine figure while not not coming off as weak nor dependent on anyone but her self. Jet Girl is the heroine that keeps red lip stick in her 12-eyed boots. A girl who gets the dirtiest jobs done while still looking good doing so. She captures strength womanhood while staying classy, she is Hepburn and Kahlo, Bond and Bronson. A high stepping woman with a gun in her hand and a smile that keeps you guessing.