In Captain Victory and the Galactic Rangers #1, Captain Victory is launched into an epic adventure that spans both space and time! All your favorites are here — as well as all-new enemies to face! Your new favorite cosmic comic book has finally arrived!

“As a fan, this was the first Kirby creation I was in on the ground floor of… so to be writing this series is a big deal and a huge honor,” says writer Joe Casey. “And we’ve got some of the best artists in the business — a lot of my favorite artists, in fact — to turn this thing into a jam of cosmic proportions. And just like Kirby always did, we’re going to be pushing the envelope in all sorts of cool ways.”

“I am very pleased to announce that one of my father’s iconic characters will once again be part of the world of Dynamite Entertainment,” adds the Trustee of the Kirby Family Estate, Lisa Kirby. “Nick Barrucci has brought together a very talented team of people, which include writer Joe Casey and artist Nathan Fox. Through them Captain Victory and the Galactic Rangers will be introduced to a whole new generation, and for those already familiar with The Captain and his team, I am sure you’ll be entertained as well!”

“We’ve wanted to relaunch the universe of characters by the late, great Jack Kirby, but wanted to wait for the right creative team to help us reintroduce the characters to comic fans,” states Dynamite CEO/Publisher Nick Barrucci. “Joe Casey is a huge fan, and is bringing his own voice to these fantastic characters. We spoke about the direction he thought would engage fans, and Nathan Fox’s participation just sealed the deal. This series has been in the works for over a year as both Joe and Nathan had to fit it in to their schedules, and we did not wish to rush the series. I have to say, I couldn’t be happier. Fans are going to be ecstatic with Joe and Nathan’s story and art for the series.”

And read what the other Captain Victory artists have to say!

“Honored to be working with Kirby’s cast of characters and expanding the world of Captain Victory and the Galactic Rangers with Joe Casey,” states artist Nathan Fox. “But the six-foot tall cherry on top of it all is getting to collaborate with such an insanely talented rogue’s gallery of awesomeness. This is easily one of those mind-blowing storyteller’s gigs. So humbled by the crew and looking forward to what all that Joe and the rest of us have in store for Captain Victory.”

“To draw some of Kirby’s craziest inventions with Joe Casey orchestrating the thing and to make a kick ass jam comic with some of the best cartoonists in the industry today: these are the reasons I wake up in the morning.”
– Michel Fiffe

“I’m a huge Kirby fanatic, so obviously it’s a huge honor and a thrill to work on Captain Victory! And to be in such great company with all these amazing artists…it doesn’t take a genius to figure out how stellar this project is going to be.”
– Jim Mahfood

“Working with Joe (Casey) is always a pleasure,” says Dynamite CEO / Publisher Nick Barrucci. “Joe’s vision for Captain Victory is jaw dropping-ly great and that we’re excited in the direction he’s taking the series in!”

Captain Victory and the Galactic Rangers #1 will be solicited in Diamond Comic Distributors’ June Previews catalog, the premiere source of merchandise for the comic book specialty market, and slated for release in August 2014. 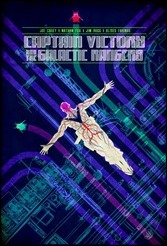 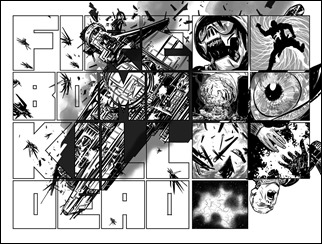 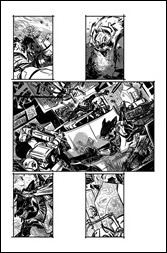 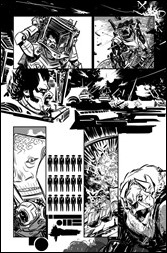