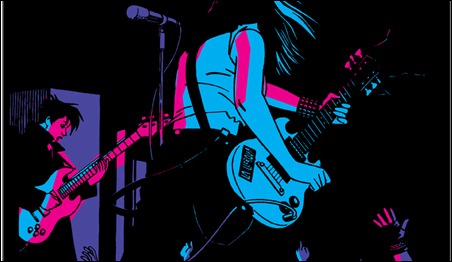 September 14th-23, the seminal Love and Rockets creators Gilbert and Jaime Hernandez will tour from Washington D.C. to Brooklyn as part of the 30th Anniversary of Love and Rockets. Signings and readings await the Northeast this fall.

First stop on the Love and Rockets train are signings at Politics and Prose Bookstore in D.C. Experience the plush bookstore and lush linework of the Hernandez Brothers starting at 7pm on Friday, September 14th.

Heading back to the small press scene, Jaime and Gilbert special guests at the Small Press Expo in Bethesda, Sept 15 and 16th, with several signings at the Fantagraphics table at the convention throughout the weekend.

The following Tuesday, September 18th, the Hernandez Brothers will be signing at Atomic Books in Baltimore. Love and Rockets: New Stories #5 features a letter from Atomic Books’ Ringmistress, Rachel Whang, who is also available for signing.

The Philadelphia Free Library proudly hosts Gilbert and Jaime Hernandez for a presentation in the Free Library’s Montgomery Auditorium starting at followed by a Q & A session. After the talk, fans and friends can get their Love and Rockets books signed in the Library Lobby from 8:30-10:30 at night.

Friday nights may never be the same especially after September 21st when the avid fans of punk, the Hernandez Brothers, bring the house down at The Rock Shop starting at 7pm.

The Love and Rockets East Coast Tour will end with a stop at the Brooklyn Book Festival on Sunday, September 23rd. Gilbert Hernandez will join many other creators on The Sex Panel: Taboo in Pictures featuring obscenity, art and the area between the two. Meanwhile Jaime Hernandez stars on a panel called Worlds Built Over Time: Panel to Page, Book to Series on world building and character development in the long term. Book signings will follow each panel discussion.

More details to come on this rare opportunity to see the creators of such favorite characters as Hopey, Maggie, Ray, Luba and Fritz on the Love and Rockets 30th Anniversary Northeast Tour. 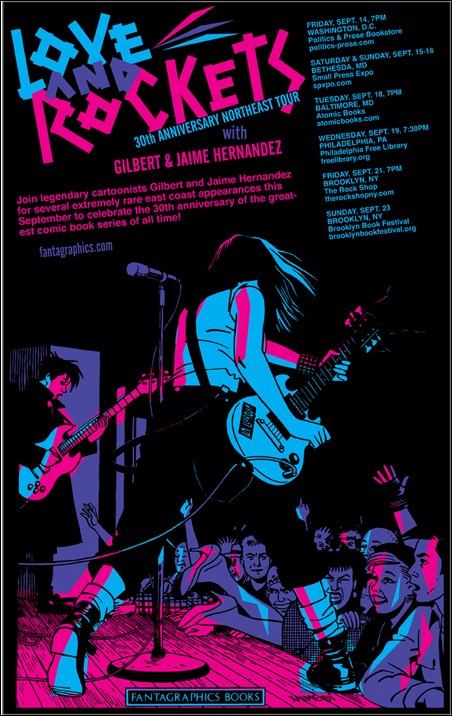