We Want YOU To Join The Marvel ReEvolution!

Marvel Comics has finally announced their new initiative that Joe Quesada has been hinting at on his Twitter feed for the past week.

Marvel ReEvolution is an augmented reality initiative that bring together both digital comics and print comics into an interactive experience.

Although Valiant Entertainment has created an augmented reality experience for their first issue of X-O Manowar, Marvel seems to be going all in with their AR app. I believe that this adds much more value than just including a digital copy voucher in their print comics.

I just hope that this doesn’t mean significant price increases or lowered print page counts in the long run. It’s still too early to tell how this will play out, but I’m looking forward to checking out these AR comics when they see print in April 2012.

An industry first, the Marvel ReEvolution seamlessly brings the worlds of print and digital media together for a comics experience like no other. The first two elements of this exciting new initiative were revealed as Marvel Infinite Comics, a new comic book format, and Marvel AR, the first major augmented reality app from a comics company. And fans will not have to wait long to get in on the action as they will both be released with the hotly-anticipated Avengers X-Men #1 on April 4th, when the two biggest Super Heroes teams in the world go to war! 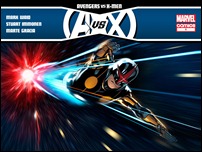 “Marvel’s always led graphic fiction industry in digital media innovation and the Marvel ReEvolution is a quantum leap into the future of publishing,” said Dan Buckley. Publisher & President of the Print, Animation & Digital Divisions, Marvel Worldwide, Inc. “We see print and digital product as complementary, not competitive—so we’ve made sure that not only do we have new digital content but also digital products that enhance the printed page. The release of Avengers VS X-Men #1, the biggest story we’ve ever told, is the activation point for the re-evolution of comics as a whole.”

Marvel Infinite Comics represent a new form of comic book storytelling, using tablets and smartphones as a new canvas for storytelling, taking advantage of modern technology while staying true to medium’s greatest strengths. The first comic released in this format will be Avengers VS X-Men #1 Infinite, from

acclaimed creators Mark Waid and Stuart Immonen and available on April 4th for purchase on the Marvel Comics app, free with the redemption of the code found in print copies of Avengers VS X-Men #1 or included with the purchase of the digital version.

“We call these Marvel Infinite Comics because the storytelling possibilities are, frankly, infinite. Writers and artists now have a whole host of new tools at their disposal to redefine the comic book medium,” said Alonso. “Current tablets and smartphones, along with comiXology’s Guided View technology, allow us to develop new, full length stories for a different medium that are very much truly comics—but experienced by readers in a way no other major company has ever executed.” 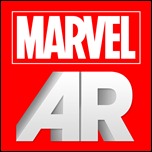 The Marvel AR app, powered by Aurasma, will be released in April for iOS and Android devices. By opening this app and scanning select Marvel products featuring the Marvel AR logo, you’ll unlock exclusive content starring the world’s most popular Super Heroes — including Iron Man, Thor, Captain America, Spider-Man, Wolverine, Hulk and many others! Go behind the scenes of your favorite comics, see new footage, hear from creators, catch yourself up on past events and more!

“Marvel AR is a perfect example of how digital innovation not only gives added value to print comics, but also brings a delivers an entirely new reading experience,” explained Phillips. “Now fans will have access to more behind-the-scenes material from their favorite Marvel products than ever before—and it’s all absolutely free.”

Check out www.marvel.com for more information on the Marvel ReEvolution and stay tuned for exciting developments as the comic industry changes forever.