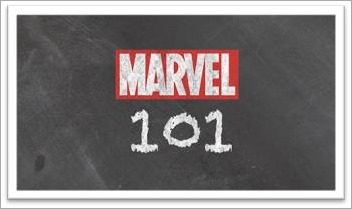 Please take your seats. Class is now in session. Since its inception, Marvel Comics has been defined by hard-hitting action, engrossing story lines and an ever expanding library of some of the most heroic and complex characters of all time! Beginning today, Marvel is excited to present an all-new video series devoted to giving fans an educational deep dive into some of the most iconic Marvel Super Heroes, you may, or may not be, familiar with. Start taking notes – this is MARVEL 101.

Starting November 23rd, with new episodes made available every Tuesday on Marvel.com and on Marvel’s YouTube page, fans will be introduced to a one minute episode that offers fans a background crash course on a selected Marvel character, storyline, weapon, location and more. It’s your cram session for the Marvel Universe available in a quickly digestible short-form video.

With such a vast catalog of MARVEL 101 content already scheduled for release on a weekly basis, on November 23rd fans will be able to watch the first 20 videos devoted to the following list of Marvel heroes:

Every Tuesday thereafter, MARVEL 101 will further explore the history of some of Marvel’s greatest heroes such as Thor (Jane Foster), Hawkeye, Punisher, Winter Soldier, War Machine, Wasp, Quicksilver, Angela, Venom, and much more!

With MARVEL 101 this is your chance to quickly explore some of the most popular characters of all time, or to simply take a refresher course on some of the most incredible entries within the Marvel library. Be sure to take notes – there may be a pop quiz.