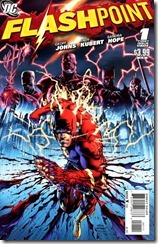 Flashpoint is a five issue mini series that affects every aspect of the DC Universe. Professor Zoom, after managing to escape Barry Allen in Flash #12, uses the power of the Speed Force to change the world as we know it.

Barry Allen wakes up in the crime lab and things seem very strange. Not only are there heroes that he’s never heard of, but his old nemesis Captain Cold is now Citizen Cold… and he’s a hero! He rushes out of the lab only to run into his mother, who is very much alive and celebrating her birthday. It seems she has never heard of The Flash, The Justice League, or Superman for that matter; but of course she’s heard of Batman.

The world created by the Reverse Flash is similar to, but also very different from the DC Universe we are used to. Batman still fights crime, but he does so filled with a palpable hatred and very little thought for the safety of the perpetrators he’s after. The Atlantean/Amazon War has cost the world over 130 million deaths as Wonder Woman and Aquaman battle over control of the Earth. Meanwhile, Cyborg has gathered together the Earth’s most powerful heroes and villains to try to stop the wanton destruction. They have come together to vote on whether they will unite to stop this war, but it all hinges on Batman’s participation.

Elsewhere, Barry Allen locates the Batcave and tries to find his old friend Bruce Wayne to find out exactly what’s going on. Except this Batman isn’t exactly who he had expected to meet.

Saying that there’s a lot going on in this issue is clearly an understatement. Even though many characters are familiar to the reader, their actions are not necessarily what you’d expect from them. Some of their names have been changed – Captain Marvel is now known as Captain Thunder and he holds a very strong grudge against Wonder Woman. And was that a Thundercat I saw?!

Geoff Johns, who guided the whole Road To Flashback storyline in the Flash series, does a good job at throwing us into the changed Earth without any sort of explanation. We’re left to wonder exactly how these characters fit into the story and have to wait to discover their roles in the coming storyline. Andy Kubert will have his hands full drawing the entirety of the Flashpoint Universe, but judging by the first issue, he’s done a wonderful job.

This story is too complex to fit into just a five issue mini so I’m sure a good portion of the storyline will flow into the multitude of Flashpoint crossovers. While the fact that a Universe changing event must, of course, tie into all the DC books, the notion of needing to buy so many books in order to get the entire story can be off-putting to a lot of readers. I’m hoping that along with this series, no more than a handful of titles need to be read in order to adequately follow the story to completion. This is a gripe that I’ve have with many crossover events from both DC and Marvel.