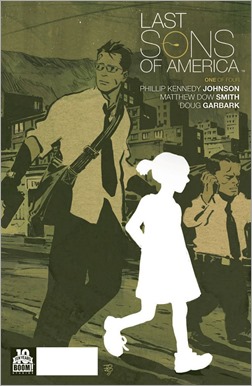 Jack and Julian Carver, two brothers who are ‘adoption agency’ workers, are looking for ‘clients’ in Nicaragua.

You see, there was a recent terrorist attack in the United States that made people infertile. This Agent Pink attack brought birthrates to zero, but people still wanted children.

The demand for children created an industry of adoption agencies that went to Central America in order to procure children from families that had several of their own. In these times, the morality of this procurement was rather vague. They were paying for kids so they could sell them at a profit in the US, but at least they weren’t pickers. The pickers would just kidnap homeless kids on the street. 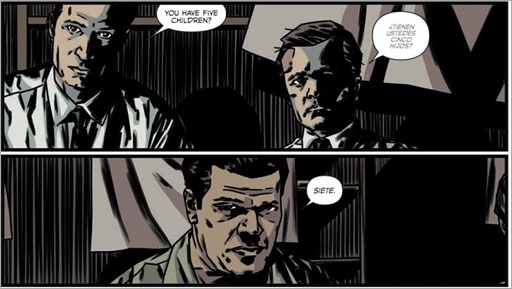 But picking was so much easier. There were quotas to be fulfilled. Jack wasn’t so sure anymore about what he had been doing.

In the first issue of Last Sons of America, writer Phillip Kennedy Johnson and artist Matthew Dow Smith set up a palpably tense environment for not only Jack & Julian, but everyone involved. Nothing good can come from a situation where ‘agents’ go around buying children from large families, no matter the financial windfall for either party.

Julian, who bears a striking resemblance to Peter Dinklage (Tyrion Lannister from HBO’s Game of Thrones), seems at odds with his job and his morals. He certainly would have no problem buying a child from willing parents, but not from those who weren’t sure. Yet this course was much nobler than just picking the homeless kids from the streets. Something Jack, whose morality has much more gray areas, would possibly contemplate.

Johnson’s writing on this book works so well. The story moves along at a good clip and there’s a wealth of material to be told in this setting. He throws out plot points and expects the reader to follow along, and rightfully so.

Along with Johnson’s writing, Matthew Dow Smith’s cinematic art style helps create the mood for the story. His heavy lines, shadowing, and layouts give it a TV series feel to it. The story and art flow perfectly throughout the entire book.

Last Sons of America certainly has the tension of Children of Men, but instead of an apocalyptic setting, the scare comes from how normal everything seems outside of the affected area. And somehow, sometime – something like Agent Pink has the possibility of actually happening.

The only bad thing I can find about this issue is that I have to wait an entire month for the next one.

If a Last Sons of America adaptation was ever created for television, it would be something I’d definitely watch.

A preview of Last Sons of America