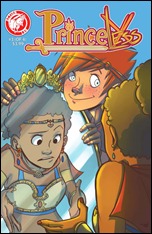 Princeless is an all-ages tale of a fair young princess locked away in a tower waiting for her prince to come save her so that they can get married, have children, and live happily ever after. 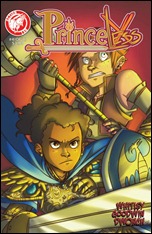 First of all, this princess isn’t fair at all, she’s rather dark-skinned. She’s also way too smart to buy into the whole “rescued princess who lives happily ever after” sorta thing that she was read to by her mother at a young age. Unfortunately for princess Adrienne, her parents are old fashioned and they lock her up in a tower protected by a dragon when she turns sixteen.

The tower she’s imprisoned in isn’t all that tall, her dragon “Sparky” isn’t all that smart, and her knights in shining armor are a rather tasty bunch – at least to Sparky.

One day Adrienne finds a sword under her bed and decides enough is enough. The princess decides she’s the only one smart enough to save herself. With the help of Sparky, she’s going to free herself and set free her other sisters who are also suffering the same fate. Of course some of them are in taller towers protected by better dragons. They were deemed a little more important than Adrienne – her being the youngest and all. 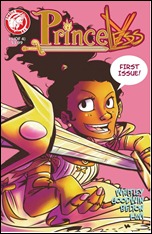 This is where her adventure begins.

Every step of the way on her heroic journey, she encounters trouble. Eventually  she meets a blacksmith’s daughter named Bedelia and that’s when things start to get a bit crazy!

Princeless is one of those stories that stick with you long after you finish reading it. Jeremy Whitley’s humor and comedic timing are top notch and drive the story along perfectly. The banter between all of the characters and their interactions with each other are fast paced, natural, and very clever.

His writing style and comedy reminds me a lot of Kyle Baker, where it’s not just the humor in the story, but the precise timing of the jokes and art.

Speaking of art, M. Goodwin’s art on the series complements the story amazingly well. The pages and layouts fit the narrative like a glove; together they tell a great comedic tale.

Certain moments made me laugh out loud. What else would you expect when you ask a dragon if she has any money or when the Women Warriors Collection is unveiled. 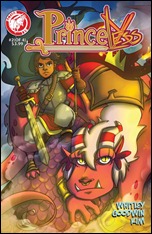 Although this is an all-ages comic, it doesn’t mean it’s just for kids. Everyone from 5 to 50+ will enjoy this series. The writing is smart and witty and the art is very appealing.

Princeless was just nominated for two 2012 Will Eisner Awards; Best Single Issue (or One Shot) Princeless #3 & Best Publication for Kids (ages 8-12). After reading Princeless #1 – 4, it’s easy to see why this series was nominated for two Eisner Awards. This the type of quality book that should be more prevalent in the industry, but unfortunately doesn’t get the attention that higher profile books do. It’s a shame really.

I’ve enjoyed this series more than many currently published Marvel or DC books lately… and some of those cost the same $3.99 cover price.

If you’re looking to read a really smart and funny story, you should pick up Princeless #1 – #4. They are worth every penny.