DC Entertainment announces the creation of The Sandman Universe, a new Vertigo line of comic books curated by Neil Gaiman, conjuring epic storytelling, immersing readers into the evolving world of the Dreaming. The Sandman Universe begins with four new ongoing series, existing in a shared universe, building upon Gaiman’s New York Times best-selling series that lyrically weaved together stories of dreams and magic.

“The Sandman Universe has always been very close and personal to me and I am thrilled to open up the world once again to an extremely talented group of writers and artists,” explains Gaiman. “I get to see the joy in these brilliant people whom I’ve selected, as they get their chance to play in this world.”

Each writer was hand-selected by Gaiman for the following series:

The new line will begin August 8, 2018 with THE SANDMAN UNIVERSE #1, a one-shot story plotted by Gaiman and co-written by the four series writers. The issue will reintroduce the Sandman Universe and its characters, while establishing conflicts that will be examined in the monthly comic books., THE DREAMING and HOUSE OF WHISPERS will debut in September with LUCIFER and BOOKS OF MAGIC hitting shelves in October. 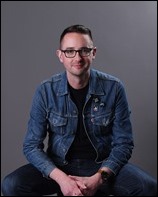 Vertigo is helmed by Executive Editor Mark Doyle, who returned to Vertigo last year after over-site of the Batman group of titles for DC, bringing a new editorial voice to the beloved imprint.

Gaiman continues, “We have a chance to remind people how fun this universe is, and with the new editorial direction from Mark Doyle, I believe we may create just a bit more magic for years to come.”

“Vertigo changed my life,” states Doyle. “I found Vertigo at a time when I was bored with comics, then I read SANDMAN and my head exploded. Suddenly I saw all these endless storytelling possibilities. I knew I had to get into comics and I had to get into Vertigo. To return to the imprint and work with Neil Gaiman to expand the Sandman Universe—it’s honestly a dream come true.” 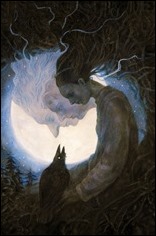 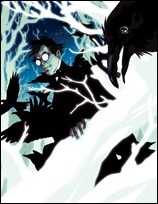 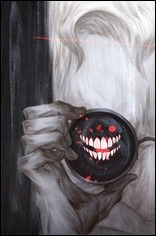 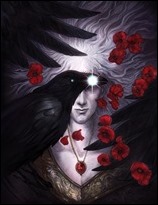 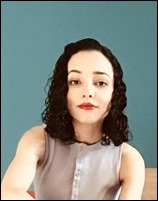 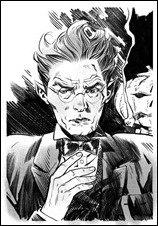 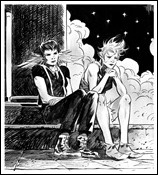 About THE SANDMAN UNIVERSE #1 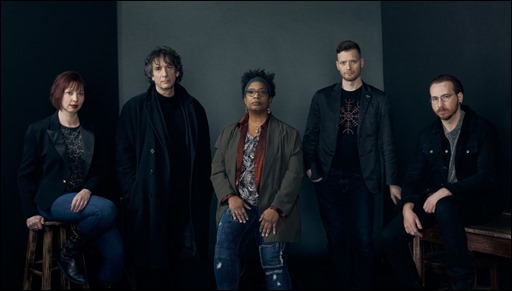 The story is plotted by Gaiman and written by Spurrier, Hopkinson, Watters and Howard, featuring art by Bilquis Evely with cover art by Jae Lee. 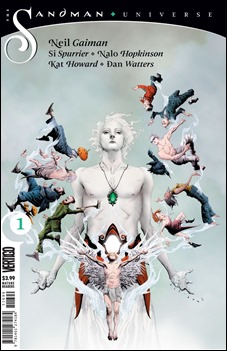 Daniel, the lord of Dreams, has gone missing and it causes chaos in the kingdom of dreams…

A rift between worlds has opened, revealing a space beyond the Dreaming. Meanwhile, A book from Lucien’s library of all the unwritten books ever dreamed is discovered by a group of children in the waking world.

Simultaneously, a new House appears—the House of Whispers—joining the Houses of Secret and Mystery in the Dreaming. Its proprietor is a fortune teller called Erzulie, whom the inhabitants of the Dreaming suspect may be responsible for all the strange goings on.

Elsewhere, Lucifer has fallen again, only this time he might be in a Hell of his own design.

From the mind of Neil Gaiman, a new world filled with dreams and nightmares, all of his wonderful characters living together in a shared universe for a story unlike anything we’ve ever seen before. 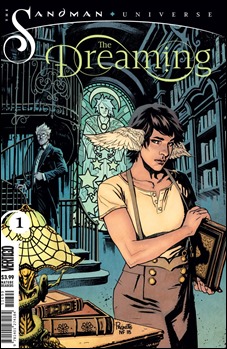 here is a place where gods are born and stories are spun. But twenty-three years after he was anointed as its master, Dream of the Endless has inexplicably abandoned the dreaming. His absence triggers a series of crimes and calamities which consume the lives of those already tangled in his fate, among them Lucien the librarian, Matthew the Raven, and Dora, a monstress without memories. But while they struggle to restore the King to his throne, they face intrigues from within and conquest from without. As usurpers circle the defenceless domain and an impossible shadow awaits its own birth beside a rip in reality, the denizens of the Dreaming play out their stories of loss and love, resignation and resistance.

SI SPURRIER is a seasoned comics and prose writer at both mainstream and independent publishers, in the US and UK (2000AD). He has written for the Big Two (SUICIDE SQUAD, X-Men) and has several creator owned fantasy and sci-ﬁ books at Image (Cry Havoc, Angelic). He  made his Vertigo debut in January 2018 with MOTHERLANDS.  His prose works range from the beatnik neurosis-noir of Contract to the occult whodunnit A Serpent Uncoiled via various franchise and genre-transgressing titles.

About HOUSE OF WHISPERS 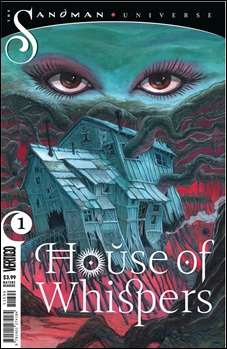 Latoya is in a coma. Her girlfriend enlists the help of Latoya’s two younger sisters. Using the Book of Whispers, they mistakenly steal the essence of Erzulie, a deity of voodoo mythology. The psychic blowback of the spell causes her house to crash into the Dreaming, beside the Houses of Secrets and Mystery and their custodians, Cain and Abel.

In the real world, the awakened young woman suffers a mystical form of Cotard’s Delusion—she believes she is already dead, and she’s transmitting her belief to others, causing them to become guardians of the Gap that has appeared in the Dreaming.

NALO HOPKINSON is an award-winning novelist linked with the afrofuturism literary movement, including works like  Brown Girl in the Ring, Midnight Robber and  The New Moon’s Arm. Hopkinson teaches ﬁction writing at the University of California, Riverside, where she is a member of a faculty research cluster on science-ﬁction. In 2018, she will be a guest of the international comics convention, San Diego Comic Con. 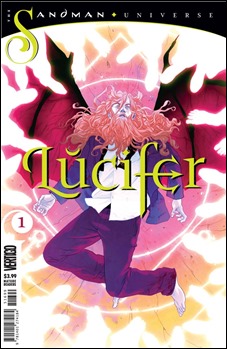 A few years ago, the devil vanished. Some people say he died or simply ran away, while others believe he never existed at all. But we aren’t some people. No. This is the one true story of what happened to the Prince of Lies, the Bringer of Light—Lucifer, the blind, destitute old man, who lives in a small boarding house in a quiet little town, where nothing is quite what it seems and no one can leave. He’s trapped, you see? Trapped in a bizarre prison with no memory of how he got there or why. Meanwhile in Los Angeles, a dying policeman believes his suffering may be a call to a divine mission—one that draws him towards revelations regarding the devil himself.

DAN WATTERS is a London based writer who has written crime and mystery comics for various independent publishers, including his creator owned title  Limbo  for Image, Deep Roots for Vault Comics, The Shadow (with Si Spurrier) for Dynamite, and sci-ﬁ and fantasy comics based on video games for  Wolfenstein,  Dark Souls, and Assassin’s Creed for Titan Comics.

About BOOKS OF MAGIC 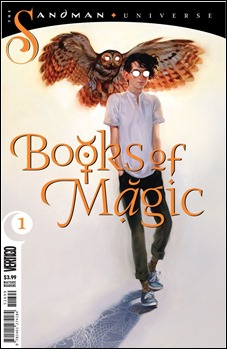 Timothy Hunter may be destined to become the most powerful magician in the universe, but he’s still a London teenager and having magical abilities complicates things more than it helps. It’s not like he can use magic to pass his exams, stop being bullied, or convince his cute friend to date him. And while Tim’s trying to live his life, there are cultists who want to kill him, believing his power will eventually corrupt him, and turn him into a merciless mage. Oh, and those are the good guys. Luckily, his new substitute teacher is more than she appears, and may be able to help Tim discover the mystery behind the Books of 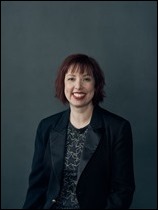 KAT HOWARD Author of novels Roses and Rot, a 2017 Locus Award ﬁnalist, and  An  Unkindness of Magicians, an NPR Best Book of 2017 and 2018 Alex Award winner. Forthcoming this fall is her collection, A Cathedral of Myth and Bone, which includes short ﬁction that has been nominated for the World Fantasy Award and performed as part of Selected Shorts.