Fraction and Chaykin team up on SATELLITE SAM

This July, acclaimed comic book creators Matt Fraction (Hawkeye, Casanova, Iron Man) and Howard Chaykin (BLACK KISS, AMERICAN FLAGG) will take readers back to the Golden Age of Television, a time when innocence was as manufactured a fiction as the perfect families in the comedies that captivated audiences at home. Their new Image Comics series SATELLITE SAM, debuting in July, takes a look at the darkness behind the small screen when, in 1951, Carlyle Bishop, the star of the beloved serial "Satellite Sam” turns up dead in a filthy flophouse. 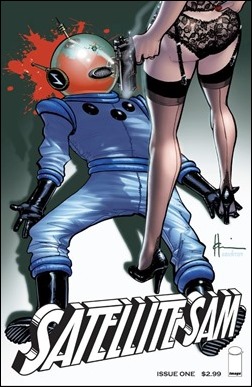 Carlyle’s son Michael has a hunch that his father’s death was anything but natural, but the only clue is a box full of photographs of women in various states of undress — and Mike can’t bring himself to stay sober long enough to make any sense of it.

For Fraction and Chaykin, SATELLITE SAM is a chance to tell a murder mystery while simultaneously divesting the 1950s of its mantle of moral purity.

"It’s a detective story, a history of television, and a record of addiction, sex, and depravity during a time when the antiseptic shine off Ozzie and Harriet obscure what was really happening in the world,” said writer Fraction. "And these are just a few of the many joys that come from telling a story about television while it was being invented as a mass medium in New York City.”

The creative team researched television’s early days in preparation for the series, getting a feel for the era and for the people who lived real lives while inventing an idealized — and fictionalized — image of families and relationships.

"We’d been talking about SATELLITE SAM for a while, but what really got it going was a long Winter’s day Matt and I spent wandering New York, feeling the city’s ghosts, its lost and found architecture, ending up at the Paley Center, where we watched kinescopes of long dead men and women, acting out children’s fantasies, while living complex lives off-camera,” said Chaykin. "To say that I’m both having the time of my life collaborating on this project, and getting my ass kicked in the process, is to grossly understate the case.”

SATELLITE SAM is an ongoing black-and-white series. Its first issue can be pre-ordered now from the May issue of Previews and will be in stores on July 3.