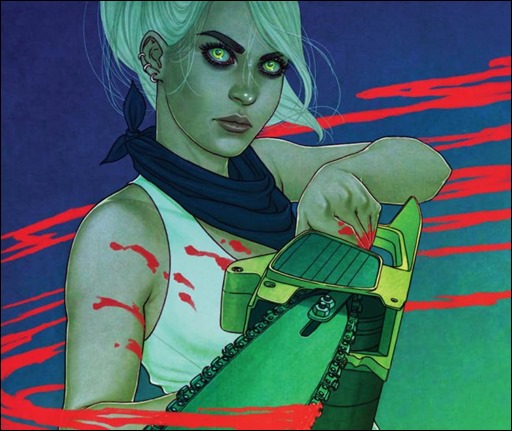 Discover What Comes Next for the Mysterious Monster Hunter in Acclaimed Horror Series in March 2020.

Here’s your first look at Something Is Killing The Children #6, the start of a new story arc by writer James Tynion IV and artist Werther Dell’Edera, on sale March 18, 2020 from BOOM! Studios.

BOOM! Studios today revealed a first look at the start of a new story arc in SOMETHING IS KILLING THE CHILDREN #6, the latest issue of the highly acclaimed original horror series from GLAAD Award-winning author James Tynion IV (The Woods, Batman), artist Werther Dell’Edera (Briggs Land), colorist Miquel Muerto (Bury the Lede), and letterer AndWorld Design (Martian Manhunter), about a close-knit community rocked by a series of murders and the arrival of Erica Slaughter, the mysterious figure who rides into town claiming she can stop the brutal attacks turning their lives upside down.

Erica may have slayed the beast terrorizing Archer’s Peak, but the town is far from safe. As James recuperates from the horrible events of the last issue, Tommy also struggles to find his place in the new status quo of his life.

SOMETHING IS KILLING THE CHILDREN is the latest release from BOOM! Studios’ eponymous imprint, home to critically acclaimed original series, including Once & Future by Kieron Gillen and Dan Mora; Faithless by Brian Azzarello and Maria Llovet; Abbott by Saladin Ahmed and Sami Kivelä; Bury The Lede by Gaby Dunn and Claire Roe; Klaus by Grant Morrison and Dan Mora; Folklords by Matt Kindt and Matt Smith; The Red Mother by Jeremy Haun and Danny Luckert; Alienated by Simon Spurrier and Chris Wildgoose; and the upcoming King of Nowhere by W. Maxwell Prince and Tyler Jenkins. The imprint also publishes popular licensed properties including Joss Whedon’s Firefly from Greg Pak and Dan McDaid; Buffy the Vampire Slayer from Jordie Bellaire and David López; Angel from Bryan Edward Hill and Gleb Melnikov; and Mighty Morphin Power Rangers from Ryan Parrott and Daniele Di Nicuolo.

Print copies of SOMETHING IS KILLING THE CHILDREN #6 will be available for sale March 18, 2020 exclusively at local comic book shops (use comicshoplocator.com to find the nearest one) or at the BOOM! Studios webstore. Digital copies can be purchased from content providers, including comiXology, iBooks, Google Play, and Madefire.

For continuing news on SOMETHING IS KILLING THE CHILDREN and more from BOOM! Studios, stay tuned to www.boom-studios.com and follow @boomstudios on Twitter.