ATHENA VOLTAIRE FLIES TO SEQUENTIAL PULP ON A DARK HORSE

Globetrotting aviatrix Athena Voltaire battles Nazis, occult science, and mythical creatures against the backdrop of the pulp era. And now she’s coming in for a landing with Sequential Pulp Comics.

“Steve and I share a common love for all things pulp and for telling great stories. His character, Athena Voltaire, could not be a better fit for our line of graphic novels,” said Sequential Pulp president Michael Hudson. “These stories will have a beginning, a middle, and a true end to them, giving the reader a complete and fulfilling experience. The art and the writing are masterful. I can’t wait to see how Steve and his team develop this wonderful property as we move ahead.”

“I can’t think of a better home for Athena Voltaire than the Sequential Pulp imprint. Their commitment to adapting genre classics and creating new pulp icons is second to none,” said Bryant. “To be published through Dark Horse is the cherry on top. Hellboy, B.P.R.D., Buffy, Battlepug—they put out some of the best comics on the stands today. I’m flattered and humbled to see my book added to such a prestigious line!”

Athena Voltaire launched as a part of the Modern Tales family of webcomics in 2002 and was nominated for a Best Digital Comic Eisner Award in 2005. The feature was also included in St. Martin’sThe Year’s Best Graphic Novels, Comics and Manga (2004 edition).

With titles scheduled into 2015 and beyond, Athena Voltaire is sure to continue to please its existing fan base, as well as those who will be coming aboard through this relaunch. Anyone who enjoys pulp, classic adventure stories, and modern comics will fall in love with this heroine who is unlike any other in comics today. 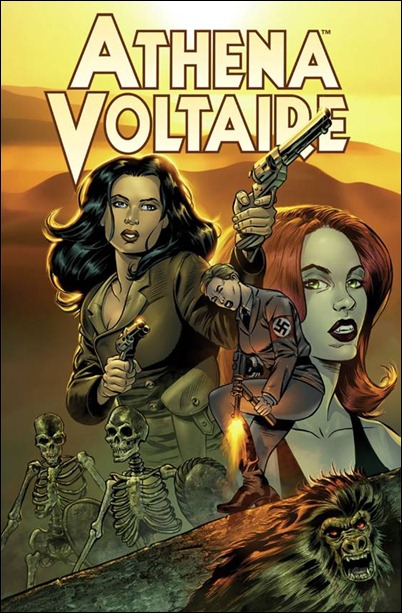