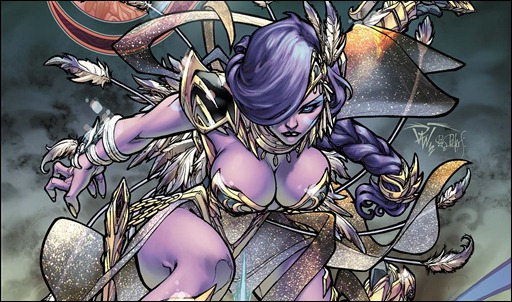 Aspen Comics’ plans for their tenth anniversary celebration in 2013 continues as the publisher announced its third release in their sweeping “10 for 10” initiative, the all new fantasy-adventure epic, Jirni, created by writer J.T. Krul with art by Paolo Pantalena and Brett Smith.

The solicitation for Krul’s newest venture into the fantasy realm reads:

Discover a whole new world of adventure! Trekking through a violent and dangerous frontier of savage barbarians, devious thieves, and wild creatures, a warrior-princess named Ara searches for her mother, who was stolen away from her kingdom by a mysterious sorcerer with the help of his powerful D’jinn.  What great and terrible secrets await her in the distant horizon? Prepare to experience an epic tale of fantasy and wonder without boundaries. This is Ara’s quest. This is Ara’s destiny. This is Ara’s – JIRNI.

"Jirni is a celebration of all the things I love about fantasy and adventure.  It’s the tale of a girl on a quest beyond anything she ever imagined, venturing into a world she barely knew existed. For anyone who has been captivated by the vivid imagery of Frazetta’s masterpieces, this book is for you. For anyone who relished in the visceral energy of Conan the Barbarian or got lost on the rich mythic sagas of Excalibur or Clash of the Titans; for anyone who rolled a ten-sided die or refused to leave Middle Earth; for anyone who followed such adventurers as Flash Gordon or John Carter, or walked the long and crazy path with a gunslinger named Roland, this book is for you. Don’t miss it. It’s going to be a hell of a Jirni."

As part of Aspen’s “10 for 10” initiative, Jirni #1 will be offered for the new reader-friendly price of only $1, and will feature a host of incentives for retailers and fans alike, many to be announced by the publisher in the coming weeks.

The affordably priced Jirni #1 will feature a direct cover by the series team of Pantalena and Smith, while fans who add the series to their local comic shop’s subscription box are eligible for the special Jirni #1 Aspen Reserved Edition cover by Pantalena and colorist Peter Steigerwald. Fans who collect all ten of Aspen’s “10 for 10” Reserved Edition covers will be eligible to receive the free full-size Aspen Comics “10 for 10” Jam Poster from their local retailer.

The publisher plans to reveal more news on Jirni soon, along with further details on their upcoming “10 for 10” releases.

For more information on Jirni and Aspen Comics please check www.aspencomics.com and www.aspenstore.com and follow Aspen’s “10 for 10” on Twitter with the hash tag: #Aspen10 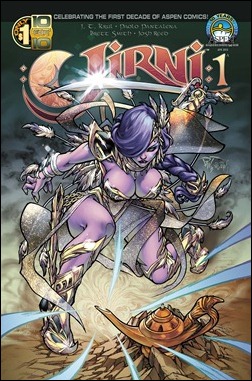 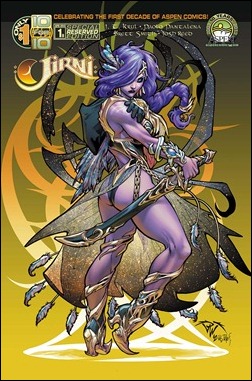