Action Lab has announced their first ever free comic on ComiXology.

The Order of Dagonet #1, a double-sized 44 page comic by writer Jeremy Whitley and artist Jason Strutz, is not only a great deal, but also a perfect jumping on point.

You can find the link to the free issue in the press release below.

The first issue of “The Order of Dagonet“, written by “Princeless” scribe Jeremy Whitley and illustrated by the amazing Jason Strutz is now available for free to anyone that uses Comixology.

People often tout issues as “jumping on points” but what better jumping on point could you ask for than the first issue!  If you’ve been meaning to check the book out or if you’re a fan of Princeless (or even just a fan of free stuff) this is your chance to try out a great book.  And if that wasn’t enough, the free issue is a 44 page double-sized book!

For those who don’t know, “The Order of Dagonet” is the tale of the reemergence of mythological creatures into modern England and those tasked with fighting them.  When the seal is broken that’s been keeping the monsters of lore at bay, the only people who can stop them are the Knights of England.  Unfortunately, the age old tradition of knighting has changed a bit since the ages of old.  The knights who come to the rescue are not men in shining armor, but instead a burnt out rock star, a Shakespearean actor turned B-movie regular, and an author of popular children’s books.  They’re no heroes, but they’re our last defense against the forces of Faerie! 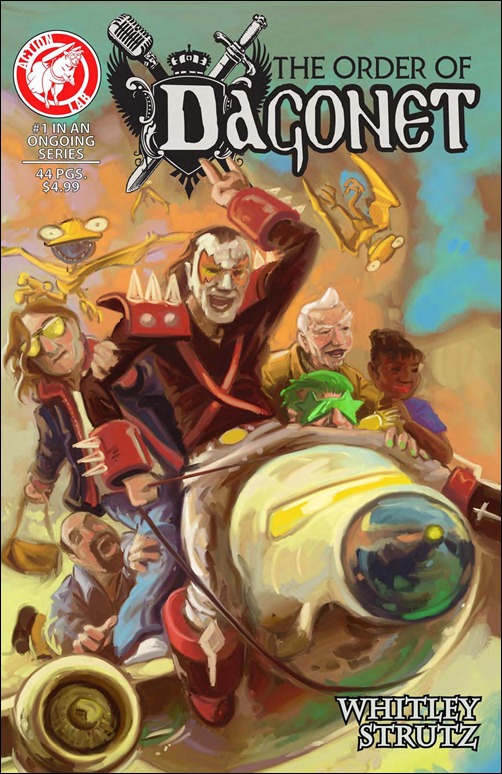 Grizzled Action Lab veterans Jeremy Whitley (script) and Jason Strutz (art) bring a tale of myth and mystery with the release of The Order of Dagonet #1!

When mythological creatures of ancient Britain return, the call goes out to England’s knights for help. Unfortunately, the call is answered by an aging rock god, a classically trained actor, a writer of boy wizard books, and a pop star in funny glasses!

This oversized issue (40+ pages) is stuffed with action and mystery and introduces the reader to the magical world of Great Britain.