THE WALKING DEAD #100 SELLS OUT, GETS 2nd PRINTING

After the recent announcement that The Walking Dead #100 had set recent sales records, you could see this one coming a mile away. Let’s see how many printings it gets before all is said and done.

Coming off a whirlwind release day the week of Comic-Con International and supported by special events at comic book stores around the country, THE WALKING DEAD #100 by Robert Kirkman and Charlie Adlard will receive a second printing after selling out of its record-setting first printing. At 383,612 copies, the sales of THE WALKING DEAD #100 were the best initial orders for a single issue of a comic book since 1997.

A harrowing and heart-wrenching event in the lives of Rick Grimes and his band of survivors, THE WALKING DEAD #100 has been critically acclaimed for its examination of violence and mortality.

At The Comics Journal, Sean T. Collins considered the depiction of brutality: "It’s hugely graphic and gory, but more importantly it’s predicated on anguish and agony, on a character begging for their life and slowly losing it anyway, in view of other characters, including children, made to watch as punishment," he wrote. "A ‘bad guy’ is committing the violence, but its horribleness is quite of a piece with the series’ presentation of human-on-human violence overall."

Augie De Blieck, Jr. at Comic Book Resources wrote, "[T]his issue delivers. It is not, however, the massive rampage of blood and guts I expected it to be. Robert Kirkman and Charlie Adlard deliver something much smaller, but just as effective, creepy, tense and sad."

The issue inspired Bleeding Cool‘s Adi Tantimedh to ponder the function of tragic fiction in society. "I wonder if the popularity of THE WALKING DEAD and the zombie apocalypse genre is a kind of atavistic ritual that the culture is partaking in to magickally ward off the worst that could happen, which is societal collapse into full horror," Tantimedh wrote. "…[T]he proxy of fiction allows the audience to mentally put themselves through the horror to find catharsis and feel more secure after the experience."

The second printing of the milestone issue will feature a new cover with art by Adlard. It is available for order now with the Diamond code JUN128066. 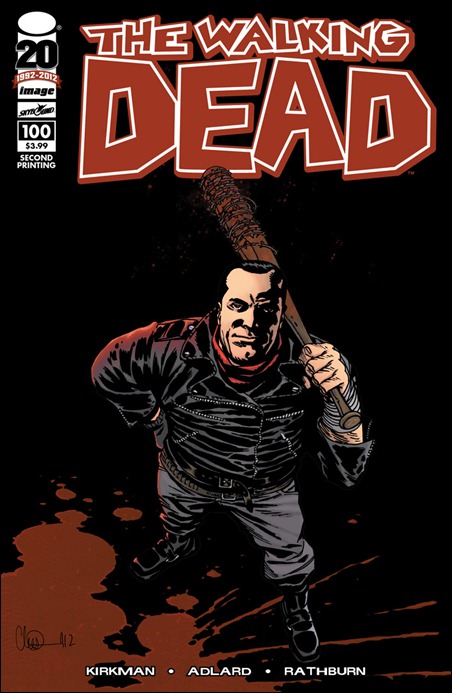