Transformers Prime: Beast Hunters #1 Coming In May 2013 From IDW Publishing

The Ultimate Beast Hunters Are Back!

Grimlock and The Dinobots return this May!

TRANSFORMERS fans hungering for more thrilling adventures with GRIMLOCK and his fierce DINOBOTS cohorts are in luck this May, when IDW Publishing presents TRANSFORMERS PRIME: BEAST HUNTERS! In this tie-in series to the upcoming season  of “Transformers Prime” television show featuring the new BEAST HUNTERS saga, fans will get to experience a brand-new set of cyberfang-gnashing adventures based on the iconic brand from Hasbro!

For the thousands of years since the fall of CYBERTRON, the DINOBOTS haven’t been twiddling their claws! GRIMLOCK, SLUG. SLUDGE, SNARL and SWOOP have been martialing their forces and fighting the good fight against a slew of mysterious new villains.

The lauded creative team from TRANSFORMERS PRIME: RAGE OF THE DINOBOTS returns as writers Mairghread Scott and Mike Johnson team up with artist Agustin Padilla to chronicle the fierce AUTOBOT warriors’ resistance efforts. “There was a special kind of magic in that last TRANSFORMERS PRIME series,” said series Editor Carlos Guzman. “The fans really responded to the thrill-a-minute storytelling, and I can’t be more excited to work with Mairghread, Mike, and Agustin! And with our writers heavily involved in the Transformers Prime television series, we’re in a unique place to tell stories that matter!”

That story picks up miles beneath the charred remains of the TRANSFORMERS race’s smoldering home, CYBERTRON. As the survivors of CYBERTRON’s fall cling to the last bit of Energon left in its core, the DINOBOTS begin forging an unlikely network of hope underground, standing as beacons of resistance under constant attack, while they wait for the AUTOBOTS’ leader, OPTIMUS PRIME, to save them. While their efforts are nothing short of Herculean, can they hold off their shadowy assailants long enough for CYBERTRON to be saved? There’s only one way to find out!

TRANSFORMERS PRIME: BEAST HUNTERS is a veritable feast for Transformers fans of all stripes. Touting covers by Ken Christiansen and Michael Lark, this unique, action-packed adventure is one fans won’t want to miss! 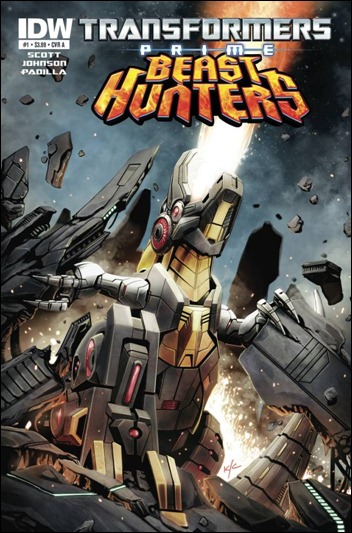