What Will “Age Of Ultron” Do To Iron Man? 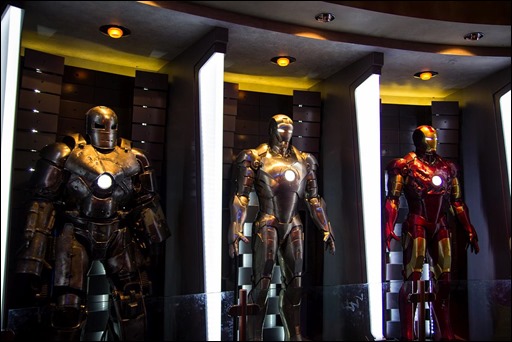 It’s no surprise that Iron Man has been featured prominently in the trailers for Avengers: Age Of Ultron. He’s not only one of the main characters of Marvel’s “Cinematic Universe,” but he’s arguably become the most recognizable and beloved of the bunch. What’s somewhat surprising is how Iron Man is being depicted in the trailers. In the film’s third trailer, we see a number of curious shots of Tony Stark/Iron Man seemingly in conflict with the rest of the team. These include one of Thor holding Tony him up by the throat and one of the Hulk bashing a super-sized Iron Man suit up against a building.

There’s likely a perfectly reasonable explanation for scenes like these. To begin with, the same trailer reveals a strong hint that Tony Stark actually created Ultron, or at least the artificial intelligence upon which he’s based… so it isn’t exactly surprising that Stark’s fellow Avengers may be upset with him. Additionally, for those who are unfamiliar with the comic lore, Marvel.com’s character page for Ultron reveals one critical ability of the new villain that appears to be in play: mind control. In addition to a range of other powers, Ultron is able to mentally manipulate his enemies, which could very well be the explanation for any Avenger vs. Avenger moments in the trailers.

But for Iron Man to simply be used in this manner—to demonstrate the power and ability of Ultron—seems somewhat unlikely, and there may be a deeper purpose behind the curious tension in the trailer. In fact, it may go all the way back to the gradual establishment of Iron Man as Marvel’s biggest character, at least in film.

It’s safe to say that when the first Iron Man film reached the cinema in 2008, Robert Downey, Jr. brought the studio to a new, higher level. His eccentric portrayal of Tony Stark struck the perfect balance between humor and heroism, and the film itself became the true foundation for the Avengers franchise expansion (even if technically there was a Hulk film first). The success of 2008’s Iron Man not only gave Downey, Jr.’s character some serious clout, but a head start as well.

All these years later, Iron Man is easily the most thoroughly established of the Avengers. He’s the only one of the bunch to have three standalone films to his credit, and he’s also gained a firm place elsewhere in pop culture—most notably, perhaps, in online gaming. There are actually a number of Avengers-related games across the Web, and some other characters have standalone games as well. However, none is as prevalent as Iron Man. Betfair’s bingo platform offers a clear indication of the discrepancy, in that its only Avenger-themed game is an Iron Man slot machine. The site’s additional arcade and casino platforms offer a wider range of Avengers, but it seems only Iron Man was popular enough to be featured on each and every hub. Similarly, if you search the iOS app store for mobile games for each of the four main Avengers, only Iron Man yields several independent games. While the others may have one or two each, the next results will be Avenger compilation games.

Somehow, Iron Man has also become the most relatable of the four main Avengers, even though most familiar with the comics may argue that’s a role that’s supposed to belong to Captain America. While Captain America’s humble, everyman origin and strong moral compass are admirable, Chris Evans’ portrayal of S.H.I.E.L.D.’s poster boy almost comes across as a caricature of a hero. Downey, Jr.’s Tony Stark, by comparison, is impressive but vulnerable, heroic but flawed, and probably in a way more realistic because of it.

All this is to say that somewhere along the line—and possibly at the very beginning of the Avenger saga—Iron Man became the franchise’s most important character, despite the fact that Captain America is meant to be the leader, so to speak. Perhaps that was just a result of Downey, Jr.’s charisma… but perhaps in part it was also meant to set up the next chapter of the Avengers series—the one that will come after the events of Age Of Ultron….

And that next chapter is Captain America: Civil War.

For avid fans of the series or those familiar with the comics, this won’t be a surprise. Civil War is a very popular storyline from comic lore, and given that the next Marvel film after 2015 is already known to be Captain America: Civil War, it’s safe to say the story is on its way to being adapted. And as Screenrant’s anticipatory article about Civil War clarifies, Age Of Ultron is the perfect setup for the new saga.

The basic idea of Marvel’s Civil War is that the government enacts a policy meant to regulate and keep tabs on the growing superhero population. Iron Man, following the disaster of creating Ultron, will side with the government and any heroes who agree that some form of regulation is necessary. Meanwhile, Captain America—whose history gives him plenty of reason to be mistrustful of government organizations and operations—will take the rebellious stance.

Given all this, it seems that the curious scenes we’re seeing concerning Tony Stark/Iron Man in Age Of Ultron trailers aren’t just about him being mentally manipulated, or blamed for Ultron’s emergence. Rather, it may finally be the moment when Marvel’s gradual promotion of Iron Man as a true equal to Captain America comes to a head, and the two start the process of dividing the Avengers.