Marvel’s Silver Age comics are considered, by critics and fans, to have the most adventurous and epic stories in the company’s history. As well, many unforgettable heroes and villains were brought to life in this period. Spider-man, Thor, The Incredible Hulk, The Avengers and Iron man are some of the Silver Age characters that debuted. 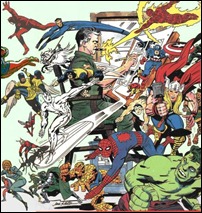 Stan Lee, the legendary comic book writer, was re-introduced to the industry at that time, and he worked along side the brilliant artist, Jack Kirby. Together, the team invented the concept of heroes beginning as real life people who discovered their powers. As a result, the young superheroes experienced inner conflicts from going through such unusual transformations. The Silver Age characters were flawed, confused, tormented and real; therefore, people felt true connections to their favorite superheroes.

Marvel was credited for drawing in a broader age demographic, for their story lines would sometimes incorporate the psyche and issues experienced by young adults, rather than just children. For example, the characters of The Fantastic Four had argued about rent money, and young Spider-Man resented his new found powers while he dealt with serious teen angst.

Often, the Silver Age characters were products of science experiments gone wrong, and Marvel’s detailed scientific story lines were appealing and fascinating. Today, audiences love blockbuster movies which involve an imaginary scientific concept that draws upon actual theories in science. Iron Man, the comic of a scientist turned superhero, is a great example of that. The legendary characters of The X-Men, which first debuted in the Silver Age, were consequences of bizarre evolutionary mutations.

Marvel’s Silver Age continues to have mass appeal, for an onslaught of movies have been released in recent years featuring Silver Age stars. Today, these coveted comic books are still being collected, traded and appreciated by old and new fans.